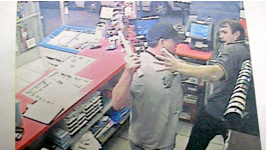 January
21, 2009 (La Mesa) — A man attempted to rob the Shell Gas Station at 5302 Lake
Murray Boulevard, La Mesa at 6:32 this morning by threatening the clerk there
with a hammer.  The suspect entered the business and demanded money.  The
suspect threatened to hit the clerk, 28, with a ten-inch-long sheet rock hammer.  A
struggle ensued over the hammer and the clerk was finally able to wrestle the
hammer from the suspect.  The suspect punched the clerk at least once
during the fight.

The
suspect fled from the business without taking anything.  No vehicle was
seen.  The suspect was described as a white male, 35-40 years old, 5 foot,
eight inches tall, 200 pounds, with a heavy build and dark hair.  He was
wearing a Chargers baseball cap, blue pants and a gray shirt that appears to
have an Eddie Bauer brand logo, based on the surveillance photo.

If you have any information on this case, call the La Mesa Police Department
at (619) 667-1400.  You may also call Crime Stoppers' anonymous toll-free
tip line (888) 580-TIPS (or www.sdcrimestoppers.com).  You can remain
anonymous, and be eligible for a reward of up to $1,000 for information leading
to an arrest in this case.