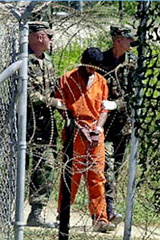 January 21, 2009 (Washington D.C.) — On his first day in office, President
Barack Obama ordered that the U.S. prison at Guantanamo Bay be closed down
within a year.  Closure of the now-infamous detention facility could result
in some of the 245 prisoners held there being transferred to Camp Pendleton,
according to a Pentagon study.   Newly elected Congressman Duncan
D. Hunter (R-Alpine) has announced opposition to hosting terror suspects at
Pendleton.  The Marine Corps Base in Oceanside is not in his district.
However Hunter has been named to the House Armed Services Committee formerly
chaired by his father.

Prior to Obama taking office, Hunter sent a letter to Defense Secretary Robert
Gates stating that "Any attempt to accommodate detainees at Camp Pendleton
would create an unnecessary distraction for the Marine Corps and interfere
with its primary mission, which is to combat terrorism"  He added, "Redirecting
these detainees to Camp Pendleton would also present a serious threat to surrounding
military installations and resources, as well as the community's civilian population.  San
Diego is not the place to transfer these terror suspects and experiment with
new detention procedures."  Hunter, a Marine combat veteran of the Iraq
and Afghanistan wars, has called Obama's decision to close Guantanamo "a serious
mistake," adding, "Suspected terrorists should continue being held at Guantanamo
Bay, where they can be safely contained."

The U.S. prison at Guantanamo has become an international symbol of oppression
and controversy following repeated allegations of prisoner abuse and torture.
United Nations human rights investigators have called for the camp's closure
after announcing they found evidence that torture had occurred.  In a
report in May 2005, the human rights group Amnesty International called the
camp "the gulag of our times" and also called for it to be shut down.
Torture allegations, if true, would be a violation of international law and
arguably the Geneva Convention, which requires humane treatment of prisoners.

An FBI memo, reported in the New York Times, described incidents of abuse
involving strangulation, beatings and the placing of lit cigarettes into detainees'
ears.  A
sergeant also complained of seeing an inmate's head slammed against a cell
door.

According to the British Broadcasting Corporation (BBC), allegations of torture
or abuse included "the force-feeding of hunger strikers through nasal tubes
and the simultaneous use of interrogation techniques such as prolonged solitary
confinement and exposure to extreme temperatures, noise and light."  Three
inmates have committed suicide and others had mental breakdowns, the BBC reported.

A CIA video reportedly contained footage of "horrific injuries" inflicted
by torture--including brutalized genitals, according to the UK independent.  The
British paper also reported that the CIA destroyed tapes allegedly containing
evidence of other torture incidents. Many detainees have also claimed they
were denied access to a lawyer.

The Bush administration argued that the U.S. is entitled to hold prisoners
indefinitely without charges as "enemy combatants" who do not have the rights
afford to either prisoners or war or to U.S. citizens accused of crimes.  President
Bush rescinded habeus corpus, the right of detainees to seek relief in court
from unlawful detainment.

More than 750 prisoners have been detained since the 911 attacks in 2001;
only 10 have been brought to trial.  Some have been released, but 245 are still
incarcerated.  Those included suspected 9-11 hijackers as well as alleged
enemy combatants in Afghanistan,”a nation where bounties were paid, providing
incentive for potential false claims by people seeking money or revenge against
another person.

"We need to bring a close to this sad chapter in American history," Obama
stated in May 2007.  "We can close down Guantanamo and we can restore habeas
corpus and we can lead with our ideas and our values."

Obama's executive order also halts the military tribunal of an inmate held
at Guantanamo until the military commission process is reviewed.  The
process has been criticized because the military serves as jailer, judge and
jury.  A judge has suspected the case for 120 days.

Closure of the Guantanamo prison is expected to take up to a year.  Some
of the remaining prisoners could be returned to their home countries or granted
asylum in other nations if their home countries refuse to take them.  Prisoners
not released could also be transferred to military prisons or possibly private
prisons in the mainland U.S., where they could ultimately face charges in U.S.
courts.

During a debate with John McCain last year, Obama praised a recent Supreme
Court decision allowing detainees to challenge their imprisonments in U.S.
Courts (a direct repudiation by the Court of the Bush policey to hold terror
suspects without the protection of U.S. law.  Even when the Nazis' atrocities
were revealed after World War II, Obama observed, "We still gave them a day
in court--at the Nuremburg trials. That taught the entire world who
we are."

In his inaugural address, President Obama again emphasized the need to respect
justice as well as rights of individuals, rejecting as "false the choice between
our safety and our ideals."