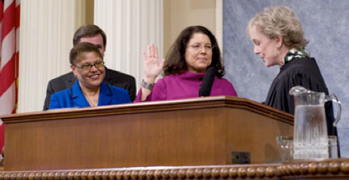 January
27, 2009 (San Diego) — Assembly Member Lori Saldaña was sworn into her new
role as Assembly Speaker pro Tempore in a ceremony in the Capitol on December
1st. The Assemblywoman’s district encompasses most of the City of San
Diego, including neighborhoods east of I-15 between Highways 94 and 52.

Assembly Speaker Karen Bass, the first African-American woman named to a leadership
positioni n the Legislature, appointed Saldaña to preside over the daily operations
of the Assembly Floor.

“As Speaker pro Tem, Assemblymember Lori Saldaña will not only preside over
Assembly sessions, one of the toughest jobs in the house, she will be an invaluable
part of the policy deliberations as we work to meet the many challenges facing
California,” Speaker Bass said.

“I know our colleagues are looking forward to Speaker pro Tem Saldaña continuing
to display the same steady hand, fair treatment and good humor she did while
serving as Assistant Speaker pro Tem.”

“To my colleagues, I pledge to run this house efficiently, fairly and in the
best interests of the people of California,” she said.

“I look forward to a very challenging, but also a very successful year.”

Saldaña said she is confident that the newly-elected class of legislators
from both parties will provide an opportunity for a fresh approach to dealing
with the state’s fiscal challenges and the consequences of economic downturn.

“With the severe economic situation affecting their daily lives, Californians
are expecting a pragmatic approach to governing,” Saldaña said. “My hope is
that we can all cooperate to solve the real-world problems faced by our constituents.”

In a taped “State of the State” response, Saldaña noted that the state has
made $20 billion in cuts and criticized the Governor’s approach. “It’s
easy for a multi-millionaire to ask other people to be ready for cuts, but it
doesn’t work for the working families, the families with disabilities that
we see outside the capitol today,” she said. “To say nothing of substance
except `expect more cutbacks’ and offering nothing in return doesn’t meet the
needs of working people in California right now.”

Saldaña has joined other Democratic leaders in calling for a budget that will
reflect “real California values” including adequate funding for education,
healthcare, transportation, and care for the elderly, blind and disabled. (To
view a video titled, “Californians want a budget that reflects real values,”
visit Saldaña’s website at democrats.assembly.ca.gov/members/a76.

Governor Schwarzenegger has projected a $40 billion deficit if the state’s
budget gap is not resolved through either spending cuts or tax increases to
raise revenues. The Legislature remains deadlocked over plans to resolve
the budget deficit, with Democrats opposing further cuts in education, healthcare
and other vital programs while Republicans have opposed tax increases
unless environmental laws and labor protections are weakened to aid businesses.

Meanwhile the funding crisis continues to worsen. Taxpayers owed state
tax refunds will be issued I.O.U.s instead and many public works projects have
been suspended. Today, the Sacramento Bee reported that California’s
credit rating, already downgraded to be tied with Louisiana for the lowest
in the nation, is expected to be lowered even further due to the budget impasse.