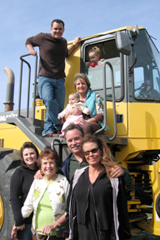 January 27, 2009 (Rancho San Diego, CA) — In a time where foundations and businesses are cutting back on financially supporting non-profits, three prominent organizations are fulfilling their pledge of $5 million toward the construction of a 35,000 sq. ft. full-service YMCA facility in Rancho San Diego. The McGrath Family YMCA, located at 12012 Campo Road, Rancho San Diego (91977), will meet the health, social and recreational needs of the under-served areas of Rancho San Diego, El Cajon, Jamul, Spring Valley and Casa de Oro. Construction on the new YMCA adjacent to the current McGrath Family YMCA Sports Complex will begin in February 2009.

The $5 million pledge from The McGrath Family Foundation, Sycuan Band of the Kumeyaay Nation, and the Dallas Pugh Foundation has put the non-profit East County Family YMCA at more than 80-percent of the financing needed for the capital campaign to construct the new branch.

The announcement of these three major organizations supporting the East County Family YMCA was made at a recent "earth moving" celebration to break ground on the McGrath Family YMCA branch on Tuesday, Jan. 27. Nearly 100 community leaders, donors and YMCA members attended the celebration, which was not your typical "shovel in the dirt" groundbreaking ceremony. Representatives from the McGrath Family Foundation, Sycuan Band of the Kumeyaay Nation, and the Dallas Pugh Foundation saddled up on earth movers to kick off the construction in a ceremonial fashion. There was also a designated marked area showing the entire footprint of the 35,000-sq. ft. branch. Also on hand were a dozen YMCA pre-schoolers playing in a sandpit with buckets and shovels, dressed in colorful clothing and construction hardhats.

The McGrath Family Foundation pledged $2.5 million towards the capital campaign. Laurie McGrath, who sits on the board of management of the Mission Valley YMCA and is an East County resident, was active in facilitating the donation from the familyâ€™s charitable foundation. The McGrath Family YMCA is being built, in part, to honor her father, C.W. McGrath, founder of C.W. McGrath, who passed away in September of 2005.

Sycuan Band of the Kumeyaay Nation has donated more than $1 million to name the 9,000 square foot wellness center at the YMCA. This is the first time Sycuan has supported a capital campaign off reservation land or Sycuan-owned property. The site of the existing McGrath sports fields is a former site of a Kumeyaay village, the Village of Jamacha. Structures cannot be built on this parcel of land because of its history and cultural significance. Sycuan has erected a memorial to mark this property. The McGrath Family YMCA building will include a Native American display to highlight the history of the site and its tie to the East County community and recognize Sycuanâ€™s generosity.

The Dallas Pugh Foundation has donated $1 million and has pledged to raise an additional $500,000 to name the 7,000 square foot Dallas Pugh Gymnasium. The foundation was established in memory of a young man named Dallas Pugh, who took his life at the age of 15. The Pugh Family Foundation is dedicated to suicide prevention and supports children and youth, in helping them build self-confidence, communication skills and athletic ability -- all the things the YMCA stands for.

The new building will expand the existing sports complex to include a 35,000-sq. ft. full service YMCA branch that will include a wellness/fitness center, gymnasium, multi-purpose and conference rooms and much more. The McGrath Family YMCA in Rancho San Diego is set to open in early 2010. The next phase of this project will include a full-service aquatics center.