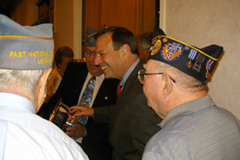 January
28, 2009 (San Diego) — Congressman Bob Filner has reintroduced legislation
to honor the service and sacrifice of many members of the United States Armed
Forces who fought in Vietnam, the “In Memory Medal for Forgotten Veterans Act”
(H.R. 671).

The bill recognizes veterans who died as a result of their service in the
Vietnam War but who do not meet the criteria for inclusion on The Wall of the
Vietnam War Memorial in Washington, D.C. The Vietnam Veterans Memorial
Fund “In Memory” program raised money to place a plaque near The Wall. The
plaque honors “those who served in the Vietnam War and later died as a result
of their service.” No names are on the plaque, but all names are recorded
in the “In Memory Book” at a kiosk near The Wall. Families can order
a copy of the book.

“Through introduction of this legislation, I hope to further honor our fallen
heroes by presenting their families with the “Jesus (Chuchi) Salgado Medal”
issued by the Secretary of Defense,” said Congressman Filner. “Chuchi
Salgado was an outstanding individual who lived in my Congressional district
and died after the war as a result of exposure to Agent Orange while serving
his country in Vietnam. His family still resides in my community.”

He added, “Because of the eligibility restrictions governing which veterans’
names may be placed on The Wall, Chuchi and many, many other Vietnam veterans
are not honored in this manner. While we are working on improving care
for our newest veterans returning from Iraq and Afghanistan, we must also continue
to do right by veterans of Vietnam, along with those of other past wars and
conflicts. It is critical that we remember those who fought courageously
and sacrificed their lives for our freedom.”

I hope we can do more to honor the troops that offered their lives to restore the freedom we enjoy today. Let's assure its passage and closely be updated like motion tracking systems.