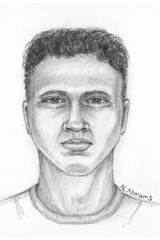 January 30, 2009 (Poway) — Three men reportedly forced a 12-year-old
girl into a van
in Poway yesterday near Scots Way and Midland Road. According to the Poway
Sheriff, the victim was walking home between 5:25 and 5:45 p.m.. Three
Hispanic male adults in older white box-type utility van stopped and forced
the juvenile into the van. The suspects drove the girl around for about 20
to 30 minutes and then dropped her off unharmed. Police have released a composite sketch of one of the suspects.

The suspects were approximately 20 to 30 years of age. One suspect was
described as being thin, having a military style flat top haircut, dark complexion, with a chipped front tooth and slanted teeth.