Next up, Sycuan pow-wow slated for 2nd weekend in September 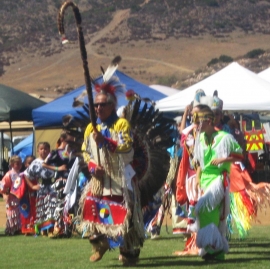 September 3, 2012 (Lakeside)- Despite scorching heat at the Barona baseball field, the annual powwow continued on from August 31-September 2. There were booths with food, hand crafted jewelry, contests for dancing, singing, and a drum contest. Over $60,000 in prize money was up for grabs.

Emcee Tom Phillips led the festivities, announcing the gourd dancing that took place on Saturday and Sunday afternoon, as well as all three evenings, and a grand entry took place nightly.

After the gourd dancing on Saturday, Phillips said that the audience just witnessed “one of the dances that honors and pays tribute to the brave ones” because “we moved from place to place.” He added, “These men that are dancing are descended from these protectors. I call them ‘camp police.’” These ‘camp police’ would protect their people from any danger including bears, he explained.

While these men shook the gourds, in a tent, there were singers “who traveled all the way from Oklahoma” around a drum.

Phillips brought up the fact that “at one time, these songs were forbidden. The US government shut them down.” One of the men participating in the gourd dancing was Moses Whitecloud, brother-in-law of Laurie Whitecloud, who is in the charge of this whole event.

There were even tiny tots and junior teen boys and girls who had on colorful traditional garb. Before they took their place on the field, Phillips prayed to their Creator to look over the children because “these [kids] are our most precious resources, they take us into the next generation of sovereignty.” Once the music started, some brave kids broke loose from the pack and started dancing.

ECM got a chance to interview Laurie Whitecloud at the festivities. Here is a Q and A:

Q: How does word get out about this event?

A: “The casino has flyers, and there are promotions in newspapers.”

Q: Can you explain the clothing used for the gourd dancing?

Q: Who started the first powwow at Barona?

A: “It started in the backyard of my parents’ house. It was in Camp Pendleton.  They gathered around with other people, they set out drums and there were boys and girls. Now they moved here. They wanted to have a powwow, and they asked the tribe if they could. Then, they allowed them to.”

If you missed this event, you won’t have to wait long for our region’s next powwow, since Sycuan will host its annual pow-wow next weekend, Sesptember 7-9.  For details on the Sycuan event, see  http://www.eastcountymagazine.org/node/10802