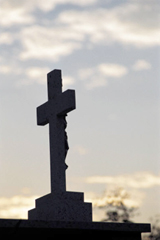 February 6, 2009 (San Diego) — In a 20-year saga that
never ends, according to an article in the Union-Tribune on January 8, "opponents of the
cross atop Mount Soledad urged a U.S. appeals court yesterday to overturn a
federal judge's ruling in July that said the controversial La Jolla landmark
could remain." A similar controversy in East County several years ago
was resolved when a cross atop Mt. Helix was transferred from public ownership
to a private group of area homeowners. (Privatization is not
an appropriate option for Soledad, since the site is a U.S. military memorial.) Instead
of rehashing the Constitutional pros and cons, I would like to reflect a moment
on my view of the meaning of Christianity - and the most appropriate monuments
to faith and humanity.

Symbols vs. the Living Christ: The theologian Dietrich Bonhoeffer
summarized the message of the New Testament with the Sermon on the Mount. For
Bonhoeffer, to be born-again meant to die as our own egotistical selves and
allow Jesus to live through us, to become the Living Christ. His writings often
refer to Matthew,

Nowhere in the New Testament are we asked to build monuments. In fact, Jesus
says "And when you pray, do not be like the hypocrites, for they love to pray
. . . to be seen by men. I tell you the truth; they have received their reward
in full. But when you pray, go into your room close the door and pray to your
Father."

At best, symbols, such as the Cross, are meant to remind us of something,
not to substitute for them. With so much suffering in the world, what should
be using our limited resources of time and money for?

Keep in mind that it wasn't until the Emperor Constantine made Christianity
the religion of the Roman Empire that magnificent temples and symbols were
erected. The cathedrals of Medieval Europe are magnificent works of architecture;
however, built by the spoils of war and oppression of the peasants.

Honoring Veterans: For those claiming that the Cross on Mt
Soledad is to honor our veterans, I would remind them that there are approximately
2,000 homeless veterans in San Diego County. With the gentrification of downtown,
the single-occupancy hotels have disappeared. War not only kills and maims
bodies; but singes souls. Instead of fighting over a symbol, why not devote
the time, money, and effort to erecting new single-occupancy hotels for our
homeless veterans with chapels, cafeterias, nursing stations, and social workers.
Why not direct our efforts as the Living Christ to helping "the least of our
brothers?"

Is Opposition to Christian Symbols on Public Lands an Attack on Christianity? Everywhere
I go in San Diego there are churches. On TV and Radio, at any time day or night
I can find sermons and religious music. During Christmas manger scenes and
other symbols of Christianity adorn many a front lawn. No group has ever challenged
these. In San Diego County, perhaps five percent of the land area belongs to
the commons, to all of us, including our military cemeteries. It is absurd
to claim that a challenge to a cross on the small amount of public area belonging
to all of us represents an attack on Christianity. An offer was even made by
a church only a few hundred feet from the cemetery to move the cross to their
property, equally visible from the harbor.

The Living Christ as the Monument to Christianity: The New
Testament is permeated with messages of love, compassion, and charity. Catholics
have the doctrine of the "Preferential Option for the Poor." In Matthew, when
Jesus calls on us to give food, clothing, shelter, and medical care to those
in need, I believe He intentionally included caring for the prisoner to remind
us not to judge, not to decide who is deserving or undeserving. Nowhere in
the New Testament are we called to build monuments. The greatest cathedrals,
crosses on every hilltop fail to demonstrate the Christianity of a community.
The only true monument to Christ is each and every person becoming the Living
Christ, not at Christmas time or other special occasions, but in our everyday
lives.

Instead of continuing to fight and waste resources to maintain the cross where
it is, move it a few hundred feet away to a nearby church where it will be
equally visible from afar, or, even better, start with building single-occupancy
hotels for our homeless veterans and place it on top of one of them. In addition,
one can always construct a foundation for people of all faiths to place their
religious symbols while conducting services at the military memorial. Then
devote your time, energy, passion, and money to making sure that everyone has
decent shelter, food, education, and medical care. That will be the true monument
to Christianity.

Joel A. Harrison, PhD, MPH. a native San Diegan, is a semi-retired
epidemiologist with a long time interest in social causes, currently focusing
on establishing a single-payer health care system.

This editorial reflects the views of its author and does not necessarily reflect
the views of East County Magazine. If you wish to submit an editorial for consideration,
please contact editor@eastcountymagazine.org.