Story and photos by Gayle Early

February 21, 2009 (Imperial Beach) On Saturday, about 200 people and 40 civic organizations gathered to protest the Custom and Border Protection (CBP) closure of Friendship Park on Monument Mesa in Border Field State Park. The media also had a strong presence, with reporters coming from as far as Canada. The new border wall runs through the middle of the park, shutting off the section where family members and friends separated by a closed border could greet and touch each other though the fence.

Rev. John Fanestil, Executive Director of San Diego Foundation for Change and United Methodist minister, spearheaded the rally and was handcuffed when he attempted to cross a line CBP drew in the sand to keep people from approaching the border fence. Fanestil was attempting to serve communion, pieces of tortillas and grape juice to people on the other side, after working his way through the crowd on the American side. Other groups present included the American Friends Service Committee, Border Angels, Border Ambassadors, Mexican American Catholic College, Sierra Club, Center for Justice and Reconciliation, Peace Resource Center of San Diego, San Diego Coastkeeper, Surfrider Foundation, WildCoast, No Border Wall, and dozens of other organizations.

Fanestil leads a weekly binational communion service on this beach every Sunday. Usually the Border Patrol allows the reverend to serve communion to his followers in Mexico through the slatted fence tolerated customs violation where for years contact through the fence was commonplace. Because of the large gathering, including a disruptive and provocative showing by the Minutemen, CBP strictly enforced their line in the sand.

A tense stand-off between protesters standing chin to chin with Border Patrol agents at the line ensued after Fanestil was escorted away. Another activist stepped over the line and was arrested, as well. CBP released Fanestil shortly afterwards but did not allow him to rejoin the gathering at the fence. He walked back up from the beach trail and sat in the sand about 200 yards from the Park.

The Foundation for Change seeks to bring an end to the construction of walls on the U.S.-Mexico border, to launch a comprehensive review of plans for border enforcement and security, and to restore routine public access to Friendship Park, according to its website.

Attendees gathered at the parking lot at the gate and hiked the long beach trail, parts of which were flooded and muddy. The other access road to Monument Mesa was flooded and impassable. It was miles roundtrip for people of all ages, first to reach the sand and then to head down the beach where the international border fence runs in the Pacific Ocean.

Keith Pedersen, Conductor with Point Loma Nazarene University, handed out sheets of Gabriel Faure's Requiem and led the crowd in singing the centuries old Latin chorale. A microphone was placed on the Mexican side of the fence for a woman there to sing a soprano solo.

The uplifting of voices, from the operatically talented to the more humble warbler, moved everybody but the Minutemen and a solid line of Border Patrol agents. The Minutemen disrupted all of the speeches, prayers, and singing with shrill megaphone alarms and shouting.

In a battle of wills, the spontaneously assembled chorus sought to ignore the taunts and raise its voice against the Minutemen's often hostile and incessant commentary. Some of the activists employed nonviolent resistance methods, such as forming a wall between the anti-immigration protestors and the peace activists. A stooped and wizened woman of Mexican descent stood up to the most belligerent of the men, holding a wooden cross (perhaps symbolizing border crossers who have died, or simply representing those cut off by the new fence). The woman prayed quietly in Spanish through a litany of wrongs shouted in her face ("they took our jobs"; "they kill people"; "they ruined our schools and hospitals"). A minister, Vernon, also with the Foundation, and a woman, Christine, who works for peace and justice issues with St. Paul's Episcopal Cathedral, plus a few others stood toe to toe with the Minutemen to prevent them from pushing too aggressively into the circle. 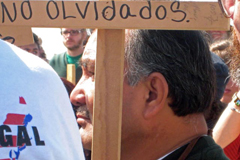 "I spent a year with Martin Luther King", Vernon, an avuncular man, a veteran of civil protests over many decades, told ECM, "and I'm trained in nonviolent resistance."

Friendship Park was dedicated in 1971 by former first lady Pat Nixon, who was quoted as saying "I hate to see a fence anywhere" as she stepped onto the Mexican side to shake hands. The park originally straddled both sides, hailed as a place where the two peoples entwined in their joint history and geography, could meet in harmony. CBP asserts that this part of the fence was used for drug smuggling and illegal entry, such as people passing babies through gaps in the fence, and needed to be closed off in the interest of national security.