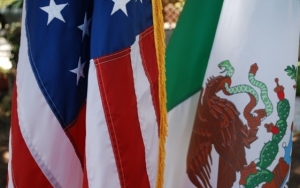 June 21, 2015 (San Diego) – On Friday, San Diego County, Imperial County, the state of Baja California and two non-profit organizations signed a memorandum agreeing to continue working together to prevent and control the spread of tuberculosis. The signing makes official a years-long collaboration between the five entities. 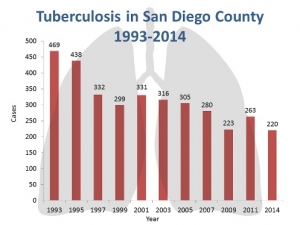 “We live in a border region where thousands of people cross back and forth on a daily basis,” said Wilma Wooten, M.D., M.P.H, County public health officer. “In order to prevent and control the spread of tuberculosis, we must address this issue together.”

Tuberculosis is caused by bacteria that most often attack the lungs, but can also attack other parts of the body such as the kidney, spine and brain. If not treated properly, TB can be fatal and continue to spread to others.

The multi-jurisdictional strategy to fight tuberculosis was established with a grant the International Community Foundation received from the Robert Wood Johnson Foundation. The goal is to find more ways to identify and treat tuberculosis patients, especially those with drug-resistant strains of the disease.

Under the newly signed agreement, all participating agencies and orginizations agree to collaborate to ensure that binational TB patients receive treatment, lend each other technical support, and enhance investigations of possible exposures to infected patients. The County’s CURE TB Referral Program is a key component of this comprehensive strategy.

Preventing Disease on Both Sides of the Border

In Baja California, the TB rate is higher than in all 31 states in Mexico and Mexico City. Imperial County’s TB rate also tops all 58 California counties.

“Imperial County looks forward to this collaboration with our public health partners in Baja California and San Diego County.  Given the fluidity of our borders, it is appropriate that TB be seen as a regional concern,” stated Dr. Munday, Imperial County health officer.

Tuberculosis rates in San Diego County are twice the national rate due to its proximity to Baja California. However, the aggressive efforts from the County Health and Human Services Agency’s Tuberculosis Control Program and its collaboration with Imperial County and Baja California have resulted in a significant drop in cases. A total of 469 TB cases were reported in 1993—the highest on record—compared to 220 cases reported in 2014. That is a 53 percent drop.

While the number of TB cases reported in San Diego County and the U.S. has declined over the years, health officials say the decrease has slowed because the disease continues to be present in hard-to-reach populations, such as the homeless, people with substance abuse issues, elderly persons who got infected years ago but are too old for preventive treatment, new immigrants and people who live south of the border but work in the U.S.

In San Diego County, an average of 229 TB cases has been reported in the past five years; 30 percent of those are binational patients.

“Preventing the spread of tuberculosis and other contagious diseases is part Live Well San Diego, the County’s vision to improve the health and quality of life of San Diegans,” Dr. Wooten added. “We must continue working together to protect the health and safety of all residents and communities in the border regions.”