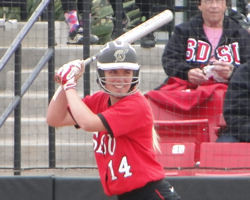 East County Magazine catches up with SDSU’s career home run leader
by Ryan Schuler
April 27, 2012 (East County) -- It was the summer after her sophomore year in high school. San Diego State’s Lorena Klopp was in Florida playing in a tournament with her travel team.
While batting, she pivoted to hit the ball. What happened next would have ended most players’ high school careers, let alone their next season. But Klopp is not like most players.
She had dislocated her knee for the fifth time and tore her MCL and patellar tendon.

She knew she needed surgery, but decided against it. She wanted to play the high school season. The day after leading Steele Canyon High School to the 2009 San Diego Section Division II CIF championship game, Klopp was in the surgery room.
Out almost a full year, Klopp, who verbally committed to the Aztecs in her sophomore year, wondered if SDSU would shy away from her recruitment. She talked to coaching staff. She had their full support.
Good thing too.
In her second season on Montezuma Mesa, Klopp has completely obliterated the career home run record. After smashing 15 in her freshman year, Klopp hit her school-record 18th homer of her career in just the fifth game of this season. Since then, she has added eight more, giving her 11 this season and a total of 26 for her career.
East County Magazine caught up with Klopp to talk about her recruitment and how she liked growing up in East County.
When did you know you wanted to attend SDSU?
I started coming to the San Diego State campus in seventh grade. I was just set on coming here. I was getting letters from a bunch of different schools, but I wasn’t really interested in anywhere else. I knew I wanted to come here before going into high school.

You had a great freshman season. What were your expectations going into the year?
I didn’t even think I was going to play. I was expecting just to have an opportunity every once in awhile, so I was in the mindset of taking advantage of every opportunity and just trying to work my way up on the team. I was willing to work at anything to be in the lineup. I was really thankful for all the playing time I got.
Seriously, where did all the home runs come from? Did you expect to hit that many?
Not at all. I’ve never hit that many in one season, even in high school. I don’t know. It just happened.
How did you enjoy growing up in East County? Did you like Steele Canyon High School?
It was awesome. Steele Canyon was a really good school. I loved it. I had a really good experience with the coaches and the whole team. It’s kind of different living here (near SDSU) because I’m kind of in the city, but I like it.

If you could eat dinner with three people, living or dead, who would they be and why?