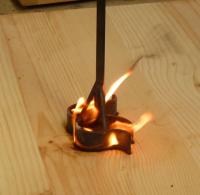 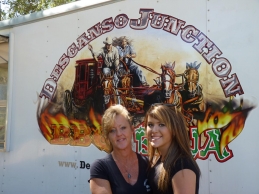 October  6, 2013 (Descanso) –The aroma of burning wood filled the air as ranchers pulled their iron brands out of a flaming pit at the Buckel Ranch in Descanso. Old-timers said it was the only time ever that ranchers from all of East County’s historic ranches gathered  in one place. The occasion?  Tammy Cooker, owner of the Descanso Junction Restaurant, invited these seasoned cowhands to burn their brands into tabletops for her popular eatery now undergoing a remodel.

Cooker has earned the community’s loyalty, having opened her restaurant just before the Cedar Fire, then keeping it open to serve up firefighters, displaced residents and stranded motorists.  Located in a century-old building, her restaurant closes down tomorrow and will hold a grand reopening celebration October 10-12. The revamped interior will celebrate our region’s historic roots.

“We opened our restaurant three weeks before the Cedar Fire in 2003,” she told East County Magazine, adding that she and her husband sunk their life savings into the restaurant.  During the firestorm—the worst in California history , she kept the doors open to help those in need.

“The fireman up here and the volunteers were amazing,” she recalled.  “The night the fire started we were open ‘til two in the morning ‘ca 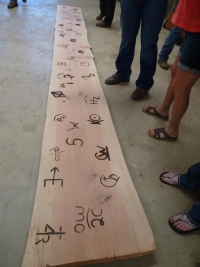 use the freeway was shut down. WE tried to provide food and hot coffee for people who couldn’t go east, west, north or south. Then they evacuated the whole area.  We weren’t real sure if we were going to have a restaurant to come back to.”

The centerpiece of the new restaurant will be special symbol of those times.  Garry M cClintock with McClintock Saddlery has donated a  slab from a Cedar tree scorched in the Cedar Fire.  “The cedar slab was saved by Garry’s wife,” Cooker recalled. “It was going to be turned into firewood and she couldn’t see that happen.”

Bill Clark from Campo Creek Ranch chuckled after  searing his brand onto the new bar top.  “It’s a lot harder to do this on a flat surface than on a moving cow,” he observed, lading that cowhide is soft, unlike the durable cedar slab.  He speaks from experience. “We brand a hundred head [of cattle] every year.”

Bob Bordelon is retired now from the  500-ac 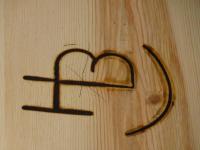 re H&B Cattle Company in Descanso. “The owner passed, so they split the cattle ranch and the daughter has it,” he said, but turned out to add the H&B brand to this bit of history happening here.

The Carrell Family Ranch in Japatul Valley dates back 50 years. Three generations of women ranchers came for the occasion, celebrating as they tried their hand at burning brands ([photo, right, and below left). 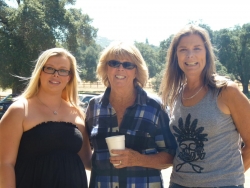 The ranches included new and old, some dating back to pioneering days in the 1800s, such as Corte Madera, which means literally "heart of wood" and bears a heart-shaped brand. 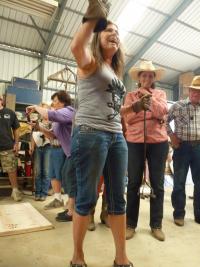 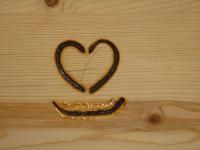 One brand came from farther afield, but with a strong local connection.

Ross Provence from the Olaf Wieghorst Museum in El Cajon took his turn with the OW Quarter Circle 2C brand from the Cunningham Ranch in New Mexico,  where Wieghorst, the famed Western artist learned the ropes as a young man.

“After he mustered out of the United States Cavalry, the Cunningham Ranch taught him everything he knew about being a western cowboy and handling cattle and busting broncs,” Provence said.  “

During his career, Olaf was the mounted policeman in Central Park; for a 20 year period he waw reported to have saved over 100 people on runaway horses.”  Those trick riding skills were learned as a young boy in Europe, where Wieghorst trained as an acrobat and rode in circuses, late 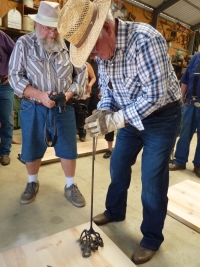 r meeting up with Wild Bill Hickock at a Wild West Show, where he develop his love of horses that became subjects of his artwork throughout his lifetime.

Besides the branded tabletops, the restaurant will also feature an unusual salad bar A customer, J.R. Bayley, is bringing in “real trees and real slabs.” We are definitely going to an old Western look,” said Cooker. 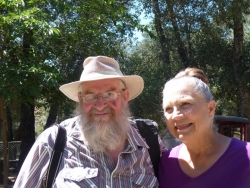 Another customer, Tony Neff, is painting a mural of East County on a wall that will feature local hiking trails, campgrounds, wineries, lakes and other attractions. (photo, right: Tony Neff and his wife, Lynn, retired publisher of the Backcountry Messenger)

After the branding, Descanso Junction's catering truck served up a piping hot barbecue lunch with all the fixings for this hungry herd of ranchers and their families.

Cooker will be added some new menu items along with old favorites on the menu when the restaurant reopens next weekend. 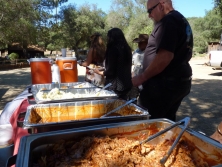 There’s a story behind every brand, indeed, just about every item in the remodeled Descanso restaurant, housed in a  century-old building.

So when you belly up to the bar at the remodeled Descanso Junction, be sure to ask Tammy Cooker and she’ll be glad to serve up your meal along with some local lore about East County’s colorful history.

Hear our radio interviews at this event: http://k002.kiwi6.com/hotlink/u9f40g11qv/descansojunctionbranding.mp3

You can visit Descanso Junction Restaurant at www.DescansoJunction.com  and scroll down for a coupon: