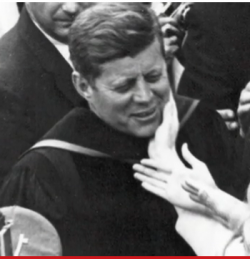 November 21, 2013 (San Diego) – Tomorrow marks the 50th anniversary of that fateful day in Dallas, when President John F. Kennedy was assassinated.   Like so many Americans, I remember the moment when I heard the news.  I was in second grade and the teacher started crying as she broke the news.  It hit me hard, since just a few months earlier, Mom had pulled me out of class and taken me to watch the young President’s motorcade downEl Cajon Boulevard in the College area.

He had just delivered a commencement speech on June 6, 1963 at San Diego State University’s Aztec Bowl, after being the first to receive an honorary doctoral degree through a California state university.  Kennedy told SDSU graduates, "As a nation, we have no deeper concern, no older commitment and no higher interest than a strong, sound and free system of education for all...In fulfilling this obligation to ourselves and our children, we provide for the future of our nation—and for the future of freedom." He reflected on the educated founders of our nation, the importance of an educated populace for the future, and the disparities in educational opportunities across the nation.

He also spoke of the importance of providing equal opportunities to all Americans  and praised California for its investment in making higher education affordable – a fact worth remembering in today’s era, when tuition rates have soared far beyond what’s affordable to many families:

“All of us do not have equal talent, but all of  us should have an equal opportunity to develop those talents. Let me cite a few facts to show that they do not. In this fortunate State of California the average current expenditure for a boy and girl in the public schools is $515, but in the State of Mississippi it is $230. The average salary for classroom teachers in California is $7,000, while in Mississippi it is $3,600. Nearly three-quarters of the young, white population of the United States have graduated from high school, but only about two-fifths of our nonwhite population has done the same.”

The President understood the importance of educating our children.  At the time of his death, his daughter, Caroline, was my age. His young son, John-John, was the same age as my little brother.

Kennedy's closing words seemed directed at me, and countless other children who came with their parents to see this young President who was an inspiration to so many.

“I have traveled in the last 24 hours from Washington to Colorado to Texas to here, and on every street I see mothers standing with two or three or four children. They are going to pour into our schools and our colleges in the next 10 or 20 years and I want this generation of Americans to be as prepared to meet this challenge as our forefathers did in making it possible for all of us to be here today. We are the privileged, and it should be the ambition of every citizen to express and expand that privilege so that all of our countrymen and women share it.”