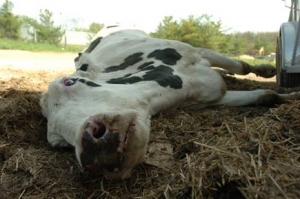 October 31, 2014 (Ramona)-- Whistleblowers in California could earn up to a $5,000 reward if their tip leads to the arrest and conviction of anyone involved in the abuse of farm animals. The Humane Society of the United States has just launched a national tip line where callers can report animal abuse at farms, slaughterhouses or livestock auctions.

Paul Shapiro, vice president of Farm Animal Protection with HSUS, says as a result of their undercover investigations, they found animal abuse at factory farms and slaughterhouses is rampant in the U.S.

"Our exposes have found evidence of workers and management cruelly beating, kicking, dragging, even torturing animals," says Shapiro. "This is the type of cruelty that simply has no place in our society and it needs to stop."

The tip line is especially for workers at farms and slaughterhouses, but anyone can call and report abuse, and also remain anonymous if they choose. The Humane Society will investigate and verify all claims and up to $5,000 will be paid if the tip leads to an arrest and conviction of those who have committed acts of cruelty against farm animals. The hotline number is: 1-888-209-7177.

The tip line is the result of some states passing ag-gag laws, such as Idaho, where it is now illegal to photograph farm animals being abused in a facility.

"It's basically evidence of an industry that is grasping at straws, trying to keep Americans in the dark," Shapiro says. "You know an industry has a lot to hide when they want to make it a crime to document the abuse of animals."

Shapiro says California is a leader when it comes to protections for farm animals with many laws in place, such as a ban on foie gras, and laws against tail docking of dairy cows and inhumane confinement of chickens, pigs and calves.