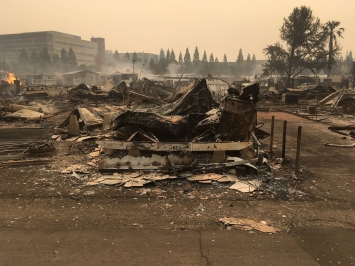 The October firestorms were the worst in California history, burning over 240,000 acres, destroying 8,800 structures and claiming 44 lives, with this week’s most recent death of a burn victim.  The fires began October 8th and the President approved a major disaster declaration October 10th.  However, While Congress has approved support for the Federal Emergency  Management Agency (FEMA) for California previously, the money allocated was primarily for fighting the fires – not the massive job of helping people rebuild after the fires that ravaged urban as well as rural areas.

Critics have contended that the President played politics by proposed funds to help only disaster victims in Republican states rebuild, while rebuffing requests from California, which voted Democratic in the 2016 presidential election.

But California’s legislative delegation is standing together in calling on Congress to approve disaster funds allocated fairly, without regard for partisan politics. Whether their colleagues in other states will stand with them remains to be seen.

Yesterday’s letter concludes, “A swift Federal response is vital, and we appreciate your dedication to helping our communities recover and rebuild.”