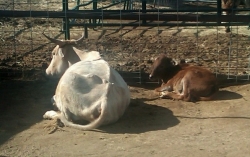 December 4, 2011 (Campo)--The Campo Sheriff’s Station and County Animal Services are investigating reports of animal neglect at a ranch owned by Raymond and Nennette Wyatt in Campo. This morning, authorities seized 58 animals including horses, goats, sheep and cattle from the ranch, located in the 1900 block of Buckman Springs Road this morning.

According to the San Diego Sheriff’s office, all of the animals seized today are underweight and have medical conditions; some also have overgrown hooves. 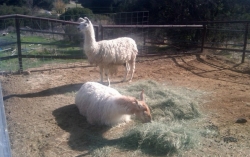 The investigation began on November 9, when officials responded to a report of 10 dead animals dumped on a dirt road west of the ranch. They found nine dead goats and a llama barely alive. Evidence was obtained from the dead animals and the llama was euthanized on scene due to its deteriorated state.

Nearby residents with animal cruelty complaints on file were contacted. Nennette and Raymond Wyatt along with their ranch employee, Michael Darnell, were questioned. An investigation determined the abandoned animals came from their ranch. A follow‐up investigation including necropsies of the llama and a goat revealed the dead animals did not have any parasites, disease or other factors that would preclude them from eating or absorbing nutrients and most likely died of starvation.

Additionally, an onsite assessment of all of the animals on the Wyatt property was conducted by an A.C.E.S. (All County Equine Services) Veterinarian. The assessment indicated that several animals of all species to include goats, sheep, llamas, cows and horses were seriously underweight and some were starving. Explicit instruction was given to the Wyatts regarding adequate penning, feed and a feeding schedule. 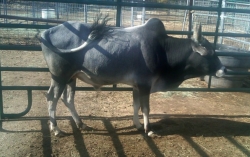 The investigation is ongoing and criminal charges are being considered by the San Diego County District Attorney’s Office on behalf of the San Diego Sheriff’s Department and County Animal Services. Today’s seizure was a coordinated effort between these agencies and the San Diego Humane Society.

The animals were taken to a county shelter in Bonita. Veterinarians will examine them and determine their medical needs.

Images from today’s operation can be found at http://bit.ly/rtvlPl.