Tragedy raises questions on evacuation notifications, causes and potential utility liability; locally concerns rise over power outages and building in areas where a wildfire could cause  traffic gridlock and mass fatalities 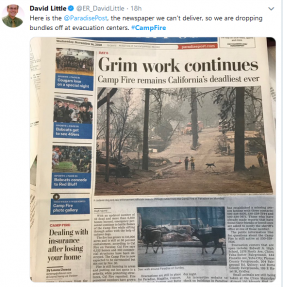 November 16, 2018 (San Diego) – The Camp Fire’s grim toll has risen to 60 confirmed deaths while the list of missing has skyrocketed to 630 as authorities review 911 calls and other reports.  The Paradise Post has published a list of those missing in the state’s deadliest wildfire, which thus far has burned 142,000 acres. The Post has dropped bundles of its newspapers off at evacuation shelters, since delivery is impossible in a town where 90% of the buildings are now gone.

The blaze has destroyed 9,600 homes and 230 commercial buildings in Butte County, leveling the town of Paradise and also causing severe damage in several nearby communities north of Sacramento. The fire is now 45% contained.

But even those who survived without losing homes or businesses may suffer long term adverse health impacts due to air polluted by chemicals that have burned as the fire scorched through urban areas.   Air quality is rated hazardous across the Sacramento Valley and into San Francisco, where trolley car service has been temporarily halted due to the air pollution.

Meanwhile questions remain as to why so many were trapped and unable to escape. Most of those who perished were elderly and some who did get out report that they received no emergency warnings or evacuation notices. Authorities awaiting confirmation from fire officials reportedly got notices out too late for some residents closest to the monster wind-driven fire.

Roads became gridlocked, causing some evacuees to be trapped and die in vehicles. Many others perished in their homes, with only bone fragments remaining from some victims incinerated by the fast-moving firestorm.  Authorities tasked with the grim job of identifying victims are asking relatives of those missing to provide DNA samples.

Deaths from lack of notification further points up the dangers faced by local residents in San Diego’s East County when SDG&E shuts off power proactively to prevent its lines from starting fires during high-wind events. 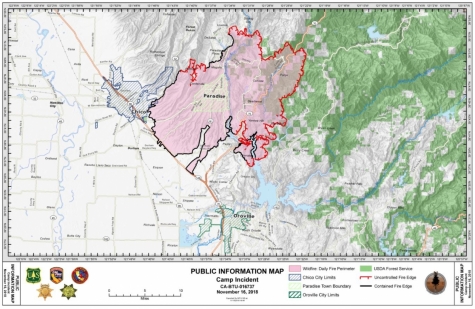 More than 30,000 people were without power here in San Diego's rural and mountain towns in recent days, leaving them without access to computers or in some cases land lines; in some areas cell phone service is spotty or nonexistent.

Supervisor Dianne Jacob, in a letter to PUC president Michael Picker on November 14th, calls for an end to proactive power shutoffs, which she calls “unacceptable and irresponsible.”  Such shut-offs mean electric wells won’t pump and people with medical needs are left on their own, she notes, adding that utilities should instead be required to fully fire-harden their equipment,

Causes of the Camp Fire remain under investigation, but some evidence including reports of sparking at a power line where the fire started, point to PG&E as being potentially liable for the devastating blaze. A new law that would ease utility company’s future financial liability for wildfires doesn’t cover fires that occur in 2018, meaning PG&E could face potential bankruptcy. In Sacramento, one legislator has suggested PG&E should not be allowed to operate in California and suggested that utility service for its service area be converted to a publicly operated utility, after PG&E previously was found responsible for other devastating and deadly disasters including the San Bruno pipeline explosion and other fires.

An article in Bloomberg news blames the tragic toll in part on “bad building decisions” in California and suggests avoiding building homes in high fire danger areas and fire-harden those that already exist. Locally, Van Collinsworth of Preserve Wild Santee has noted that Santee could see a similar catastrophe if Fanita Ranch, a 3,000-home development planned in a high-fire area already suffering traffic gridlock, is approved and built.

Governor Jerry Brown on Sunday blamed climate change accelerated by man’s actions for threatening “our whole way of life” in California, and faults leaders who fail to take action to combat climate change’s impacts which he said will take billions to address in California alone. His concerns about climate change fueling more frequent, worse and deadlier fires has been echoed by top fire officials in California.

"The president’s assertion that California’s forest management policies are to blame for catastrophic wildfire is dangerously wrong,” Rice said in a statement posted on social media. “Wildfires are sparked and spread not only in forested areas but in populated areas and open fields fueled by parched vegetation, high winds, low humidity and geography.”

Moreover, Rice concludes, “nearly 60 percent of California forests are under federal management, and another two-thirds under private control. It is the federal government that has chosen to divert resources away from forest management, not Ca

As for Paradise lost, some resilient townspeople are that their community rise from the ashes. Today, a post on Twitter reads, "We’re Back!!! The Town of Paradise has launched http://www.paradiserecovers.org . For Paradise residents & businesses this is your one-stop location for updates, community meeting information & town specific disaster recovery resources. #CampFire #ParadiseStrong #ParadiseProud."