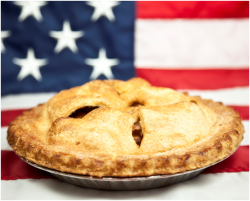 July 2, 2011 (Crest) -- For the past 65 years, the small town of Crest has hosted a 4th of July parade that's like a scene from a Norman Rockwell painting.

Festivities include floats, decorated horses, wagons, and bikes. A young girl and young boy are the reigning royalty. Sometimes there are bands from schools. Often you'll see the Lawnchair Brigade of ladies marching with folding lawn chairs, spinning them around their heads, and sitting down on them as they parade. People line up along the street wearing red,white, and blue, waving flags as dignitaries drive by.

Crest is located just east of El Cajon.  The parade starts at the South Park at 9:30, and ends at Nancy Jane Park on Crest Drive, where there is a band and booths with food and craft items--and usually watermelon.

Recent years have posed challenges with new county rules and fees, say organizers, so only at the last minute was this year's celebration and parade declared a "go."