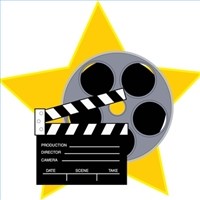 September 6, 2015 (Jacumba Hot springs) – Jacumba Hot Springs was the scene of a movie production team filming many scenes last month for the new movie “66 & Nowhere” from Soul in the Machine Pictures.

The Jacumba Hot Springs September newsletter reports that the independent film by Erin McClanahan and Chad Boyer of GSO Productions filmed at locations including Jay’s Southern Café and the area near Inkopah Road.

A premier of the film is slated to debut in February at the Kensington Theater on Adams Avenue in San Diego. The movie stars seasoned actress Carol Morrow as the femme fatale.

The film principals have raised about a third of the money needed so far for the production and have set up a fundraising site at www.GoFundMe.com/66andnowhere.  Major donors will receive tickets to the film’s premier.  You can also watch a trailer of the film at that site.

Thanks Mariam for the update on reasons for tourists to visit our little slice of Paradise. We have lots of free and low cost recreational opportunities for visitors including festivals (two weeks ago we hosted Enduring Love San Diego with around 850 attendees, September 23-25 we will have the second Jacumba Jamboree that drew 1200 last time, tickets can be purchased at Event Brite, and we have a free Fall Festival in the Community Park October 3rd); visitors can view our new public art PLUS a free Walking Tour of Jacumba brochure that highlights 16 important historical or art sites; wonderful hiking trails [the Jacumba Hikers, 26 people strong, meet every Saturday for hikes]; interesting local attractions that are family friendly and free (such as Sage Winds Farm). In addition to bird watching, visitors can enjoy a peaceful stroll around our lake to observe other wild life. The 'Crown Jewel" is our Jacumba Hot Springs Spa & Resort where visitors have two chemical-free mineral pools for swimming and an indoor Jacuzzi and Fir Sauna. It is free to the motel guests and for day users there is a small fee. The Tipary Grill has a varied menu and there is a full service bar. For Barbeque lovers, we have Jay's Southern Café on the main street. His food is AWESOME and he attracts customers from all over. I was there yesterday and had a delectable fried sea bass salad. Oh, and by the way, our Avon lady is quite attractive and we do not have a 7-11 store or a veterinarian, I am sure the previous writer has never visited us or is trying out a career as a comic (no offense Don, but don't quit your day job!)

Jacumba's spa and dozens of parcels downtown were recently bought by a new owner. The spa has been remodeled and revitalized.  They've put up some public art projects and they town is having various festivals to draw people there again.  A few artists are there, with hopes by the Jacumba-Boulevard Revitalization folks to draw more in hopes of someday having a mini version of Taos, NM.  If the railway ever gets reopened it would run through the old station at Jacumba. There's talk of starting a winery....we'll see.  The lake that was nearly dry and clogged with rushes has been partly restored; last time I was out there I saw ducks and other waterfowl.

The town's small town aura is part of the charm to some; it attracts birdwatchers, bikers, hikers, and old car aficionados who cruise through.  Not to be missed if you go is the old Desert View Tower along I-8, a classic highway attraction for longer than I can remember.

In bygone days, Jacumba was once a mecca for the silent movie stars of Hollywood, back before the fancy hotel and the old spa/bathhouse burned down, and before I-8 was built taking traffic off old Highway 80.  At one point it was almost a ghost town, but it's slowly getting revitalized.

Jacumba (ha-COOM-ba) is in east county, but few have heard of it. After you pass through the civilized part of EC on I-8, like El Cajon and maybe Alpine, flip on the cruise control, lay back and daydream a bit, and in an hour or so if you don't blink you'll see a sign for Jacumba. We might call the area Far East County, or as one SDSU geography prof referred to it: terra incognita. . . .Jacumba itself is small. How small? Well the 7-11 is only open nine-to-five, for one thing. Also they made Main Street one way a while back but they had to cancel it; everybody left town and couldn't get back. How small? The only heavy industry in town is a 300-pound Avon lady. In tiny Jacumba the veterinarian doubles as a taxidermist (but either way you get your pet back).