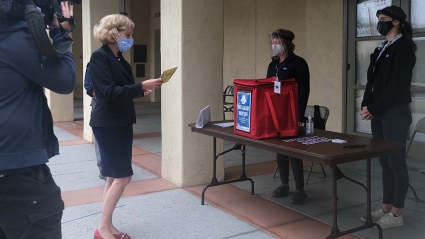 The registrar is estimating turnout to reach 80% to 85% of registered voters by the end of Election Day, compared to an 81% turnout in the 2016 presidential election.

The high early turnout, thanks to mail ballots and the opening of polling places beginning Friday, is part of a nationwide early voting surge prompted by the pandemic. As of Tuesday morning, 100.3 million Americans had voted, according to the U.S. Elections Project at the University of Florida.

“The sooner we receive your ballot, the sooner we can start processing it so it will be counted right when the polls close at 8 p.m. on Nov. 3,” Vu said last week.

In-person polling places and mail ballot locations in San Diego County will be open until 8 p.m. for Election Day.

Any voter who is in line at a polling place or drop-off location at 8 p.m. will be allowed to vote.