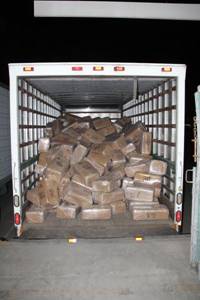 January 31, 2017 (San Diego) -- U.S. Customs and Border Protection officers working at the ports of entry in the San Diego and Imperial Valley Counties over the weekend intercepted approximately 9,600 pounds of narcotics including more than 500 pounds of marijuana hidden in a cargo shipment and another almost 8,400 pounds in a separate shipment, valued at almost $7 million.

At about 4 p.m., on Friday, Jan. 27, a truck driver arrived at the Otay Mesa cargo port of entry with a shipment of cardboard boxes and was referred to the port’s imaging system; CBP officers ran the bobtail truck through the imaging system, which showed anomalies within the shipment.  They search the contents and discovered large packages of marijuana commingled with the cardboard boxes.

Later that same day, at about 6:30 p.m., another truck driver arrived at the Otay Mesa cargo port with a shipment manifested as “Organic Sugar Confectionery,” and was referred to the port’s imaging system.  CBP officers saw anomalies within the shipment and sent the truck to the dock for off-loading of the merchandise.

From Friday, Jan. 27 through Sunday Jan. 29, CBP officers also intercepted 272 pounds of marijuana, 271 pounds of methamphetamine and almost 118 pounds of cocaine with a street value of approximately $2.6 million.  CBP officers discovered the narcotics in vehicles in various locations throughout the conveyances such as the fuel tank, dashboard, muffler, and quarter panels among others.