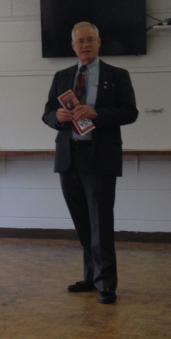 These candidates are running for the seat currently held by Assemblyman Brian Jones, who will leave office due to term limits. No Democrat or candidate from any other party qualified for the ballot.

Santee Councilmember Ron Hall shared how Voepel has served on the Santee City Council for four years and as Mayor for 16 years.

Voepel then spoke. “My message to you tonight…I’ve done it for 20 years. Santee has a balanced budget. We shrank government 16%.” He said Jones has endorsed him.

“What I’m seeing is more give and take between left and right,” he added. He demanded that the government stop taxing people and to let California businesses make money. “We don’t tax anybody,” he said of Santee. “Santee has the lowest development taxes.”

He added that he has ”20 years of being recognized on the ballot. You’ve got to send a strong person up there.” Voepel, a military veteran, said  he’s done two tours in Vietnam and currently runs his own insurance practice.  “I’m not going up there [to Sacramento] for the money. I’m going up there to work…you’ve got a man here with experience, character. If you elect Randy Voepel, I will go up there to represent you and work hard. You can make a difference by setting an example: being prepared simply because that’s in my nature.”

Voepel then took questions from the public.

David Burton from the East County Tea Party wanted to know why Mast Blvd hasn’t been connected to the county yet in 20 years, noting that Governor Brown recently opposed putting more freeways. Burton saw a need for more freeways. Voepel replied, “I support mass transportation.” The plan was to complete that project after the 52 freeway was done being constructed, but then the recession hit. So the issue is money.

A lady asked Voepel if serving 12 years in the Assembly is equivalent to one term. Voepel answered, “No. You could do three terms in six years.” Voters decided that people could run for 12 year terms for the Senate or Assembly.

Steve Johnson, leader of the Lakeside Tea Party, asked about the pay. Voepel said legislators receive $96,000 a year without pensions.

Burton then asked how Voepel felt about the Democrats and the government raising the minimum wage until it gets to $15/hr by 2022.  (The Governor’s plan was announced earlier in the day, and is expected to win approval by the Legislature.)  Voepel didn’t hear about it, but he wondered, “What can it do to Republicans like myself fighting that?”

Another woman asked  how it’s possible to allow illegal aliens to vote, and if Voepel could do anything about it if he won this race. Voepel said he couldn’t do anything at the state level because it’s all run at the federal level.(Editor’s note: undocumented immigrants cannot legally vote in California, this is a misperception since such immigrants can now get the equivalent of driver’s license and the DMV can register voters, however, the DMV is only allowed to register citizens to vote.)

Teora asked Voepel, his opponent,  two questions. First, he brought up that Voepel had proposed that businesses give money to council members, and he wanted to know if that was Libertarian. Voepel said, “For years, we only allowed a husband and wife to donate money.. We allow single corps to donate…We have many, many small businesses in Santee.” Santee even allows people to run businesses from their home.

Teora then asked who Voepel supported for president and why. Voepel said that he supports Texas Senator Ted Cruz  because he is a “Senator and has got experience.” If Cruz doesn’t win the primary, he would support Donald Trump. 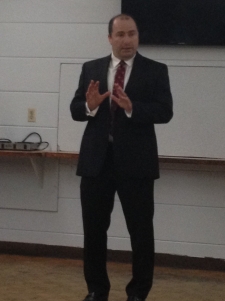 A woman wanted to know how Governor Brown could serve as governor again since he already did so in the 1970’s. Voepel told her that he was grandfathered into term limits laws.

A woman mentioned how she’s had to drive from the 52 freeway to Sorrento Valley Rd. She wanted to know if there’s been any talk of expanding an additional lane on that freeway. Voepel told her that Santee City Council has been thinking ahead and they have paid someone to look into widening the 52. “Traffic on the 52 has gone up 20%,” he added.

Teora, a Julian resident, then spoke. “I have lived in California for 20 years. I’m originally from New Jersey.” He came to California in 1994, served in the military in Japan for 10 years, and then came back to California in 2006. “I ran last time [for Assembly] against Brian Jones. I’m really an independent,” said Teora, though he remains a registered Republican.

He said he’s always been interested in politics.  He also thinks there are too many career politicians, which is a problem. He believes people want someone now without all that experience. “I think politicians should have six year terms, not 12 year terms,” he added. He studied engineering and business and he currently works as a vice president at Union Bank.

“I sincerely believe we need a better government,” he stated, adding that he is also not in this for the money and thinks his background as “a fighter” will be a benefit.  He knows about balancing a budget, and firing/hiring people, he noted, adding that in his job, he has to deal with “a lot of bureaucracy. I’m somebody you can trust who will actually fight for the people.”

John Minto, Santee city councilman, asked how he plans to compete against Hamel, a prominent local jewelry store owner who will likely be putting in millions of dollars into his campaign. Teora replied, “Leo reminds me of Jeb Bush putting in money. Money isn’t necessarily going to win the election.”

Mary Shively, treasurer of the Lakeside Tea Party, asked what he’s done with his engineering degree. Teora replied that he has done electronic systems testing and satellite systems consulting, and has taught computer science.

For more information on Teora, go to: http://tonyteora.org/.

The Lakeside Tea Party meets from 6-8 p.m. every 4th Monday of the month at the VFW Post in Lakeside.

I ask him 2 questions...one about Santee's illegal membership in ICLEI...International Council for Local Environmental Issues...which is an appendage of the U.N. Gangsters...an Agenda 21 Trojan Horse...I also ask him if he knew the Government was spraying us with toxic chemicals...they call it..Geo-Engineering!