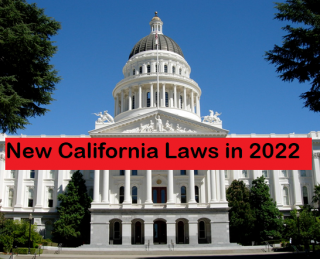 January 12, 2022 (Sacramento) -- With the new year comes not only resolutions to be made (and probably broken), but also new laws enacted (that can’t be broken, lest you incur penalties).  Last year, 770 bills were signed into law. Some went into effect on January 1st, and some will go into effect later.

Among the changes are a hike in minimum wage, increased accountability for police officers, and laws to ease the housing crunch. Some new laws are quirky: you can now legally eat roadkill and obtain restraining orders online, but you can be prosecuted for stealthily removing a condom. Students can sleep later in non-rural areas. All Californians are required to recycle organic waste and abide by new gun laws; registered voters will receive ballots by mail.

Here is an overview of these and other significant new laws that may impact you. Click the bill number to read the full legislation.

In  response to the high cost of housing in California, this law limits local government’s ability to “downzone” neighborhoods unless it also increases density in other areas until the year 2030.

This bill also seeks to address the housing crisis in California by allowing many property owners to build a duplex on a single-family lot, or to divide their property into two for a total of four units. The law has provisions to ensure that lots are concentrated in urban areas, not fire-prone rural locations or historic districts.

SB 10 facilitates the process for counties or cities to streamline construction for as many as 10 units on a single parcel.

This measure provides the state’s Commission of Peace Officers Standards and Training with authority to strip certification of police officers by a two-thirds vote, if ab officer has a record of misconduct. It prevents police who have a record of misconduct from resigning before facing discipline and applying with another police force in the state. The law also allows police officers to review and contest any disciplinary action. A misconduct review can be initiated by action of physical abuse, gang activity, sexual assault, dishonesty or tampering with evidence.

This bill, which went into effect on January 1, requires that police must make an effort to deescalate any social unrest and allow people to leave the scene and make an effort to distinguish between those engaging in violent acts and those who are not. It prohibits police from indiscriminately firing into crowds.

Senate Bill 98 allows journalists to have access to areas considered closed-off, such as demonstrations and protests.

Large companies that maintain warehouses in California are now required to inform their employees about quotas and limit the use of quotas so high that employees are denied time to eat or use the bathroom.

Barbers and cosmetologists will be able to acquire their licenses after 1,000 hours of training, rather than the previous 1,600 hours.

This law makes mail-in ballots a permanent part of all future elections, while also allowing for in-person voting at polling stations.  It also requires that every registered voter receive a ballot, whether they requested one or not.

AB 600 ensures that crimes targeting people due to their immigration status are considered hate crimes.

Assembly Bill 1171 removes the distinction between “rape” and “spousal rape” under existing law, making the victim’s marital status to the perpetrator irrelevant.

According to the Governor’s website, “The Governor advanced a series of initiatives to support survivors of domestic violence during the COVID-19 pandemic, including support for local service providers, a partnership with the Women’s Foundation of California to raise private funds that support domestic violence organizations and private sector partnerships to provide free accommodation and transportation to survivors fleeing violence. California has also launched “text-to-911” capability throughout the state and the 2021 state budget includes $15 million in funding for Cal OES to administer grants that support domestic and sexual violence prevention efforts.

This Bill makes it a legal requirement to first obtain verbal consent from a partner before taking off a condom. Not doing so would be considered an act of sexual battery.

This law calls for the state to use community animal blood banks, which draw donor blood from volunteers, and phases out the use of so-called “closed-colony canine blood banks,” where dogs are confined to provide blood to other sick dogs.

In an effort to reduce the massive amount of plastic waste we produce, Assembly Bill 1276 makes it a requirement for customers to specifically request single-use plastic items, such as plasticware, soy sauce and ketchup packets. Otherwise, restaurants should not be providing them.

As a result of the COVID-19 epidemic, restaurants were permitted to sell to-go cocktails. Senate Bill 389 extends that policy until the end of 2026.

Many health professionals say that preteens and teenagers need their sleep for their health and development. Senate Bill 328, which goes into effect on July 1, 2022, requires middle and high schools to start school no earlier than 8:00 a.m. and 8:30 a.m., respectively. Rural school districts are exempt.

In an effort to reduce greenhouse gases caused by organic waste in landfills, and under the penalty of fines (which will not begin until 2024), California residents and businesses are required to sort their organic waste from the rest. The law is being phased in over time, depending on where you live.

Starting January 1, the state launched a pilot program that allows people to collect and eat roadkill. The law allows for the collection and consumption of “deer, elk, pronghorn antelope, or wild pig” that have been hit and killed by a vehicle. A report must be submitted of the find and a permit obtained before being able to take the animal. The law requires the state to create an online and mobile-friendly way to file the report and obtain the permit.

SB 320 requires the implementation of uniform procedures to ensure individuals who are prohibited from owning firearms due to a domestic violence restraining order relinquish their weapons.

AB 1191 requires the Department of Justice to analyze crime gun data to trace the history of firearms used in crime and identify trends, providing important insight on how these guns are trafficked.

Starting Jan. 1, terminally ill patients won’t have to wait as long to request fatal drugs. The waiting period between the two required requests will drop from 15 days to 48 hours.