September 19, 2010 (Santee) - They call it a race when candidates compete for election, and in the case of the contest for city Council here, the word “race” seems appropriate.

One candidate actually runs footraces. Another ran through a wall of flames during the Cedar Fire, earning national recognition for his heroism.  Several others, in defining how their experience will help them should they be elected, stated they will “hit the ground running.”

That's because most have some experience in local politics. 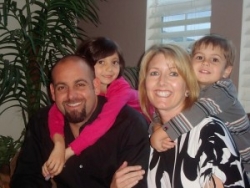 Qualin is the actual runner, competing in local events. 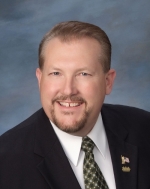 Minto has led the Santee Firefighters Association as the team captain for the annual Santee Relay for Life for more than five years.

Reyes, designated a hero of the Cedar Fire by the Smithsonian Institute, saved his parents, then ran through a wall of flames as fire engulfed the family's home.

“If elected, you will have a representative that will hit the ground running, with little to no learning curve,” McNelis, a real-estate broker, says on his Web site. He explains in an East County Magazine questionnaire that “I have had a better attendance record for the last six years at the City Council meetings than most of the seated Council members.”

While not using the running analogy exactly, Kalasho, on his Web site, says he has attended numerous Council meetings over the past five years and and “can start his duties as a Councilman first day on the job.” 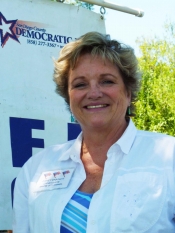 Enright, a retired administrator, says after 30 years of experience in county governance and leadership, both with the district attorney and the medical examiner, she “will be able to hit the ground running from day one.” She also has grant-writing experience that she hopes to utilize to find additional funds for Santee.

Only one of the candidates, Minto, is an incumbent. But another, Ryan, is the brother of a current Councilman, Hal Ryan, who is not seeking re-election. A third seat is vacated by Brian Jones, who is running for Assembly.

Although Council seats are nonpartisan, political parties usually support their own.

The local Democratic Party has announced its endorsement of Enright and Reyes. Ryan also declared himself a Democrat. 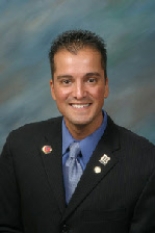 While McNelis claims Republican Party support on his Web site, the party's Web site shows no endorsements yet in the Santee race.

In an e-mail to members of the Santee Democratic Club,, its president, Patrick Hurley, said “With three seats up for election … we should be able to elect Democrats to our City Council for the first time in ten years.

“All it will take is for Democrats to vote only for our candidates because Republicans have at least five candidates on the ballot; spreading out their vote and allowing at least one of our candidates to come in 3rd. We are outnumbered in Santee by 4000 voters, 12,000 registered Republicans vs. 8,000 Democrats, this is a daunting number, but not if we talk to our fellow Democrats about only voting for our endorsed candidates. If we do this, we will win a seat on our City Council and finally have the representation we deserve. 8,000 Santee Democrats deserve representation at City Hall.” 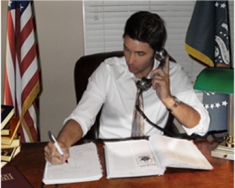 Hurley calls all five other candidates Republicans, but Kalasho reported himself as nonpartisan.

There was not unanimity among the candidates when asked the top issue in Santee, but most mentioned balancing the budget in precarious fiscal times.

Enright said “Continuing to expand may generate profits for corporations and a few wealthy investors, but if it is not done in a controlled manner, the consequences can be quite negative.”

Groce, an aerospace engineer, said the biggest issue stems from raids on city coffers by officials in Sacramento. With my vote, I will help to manage Santee’s budget to preclude a sales tax increase for our city,” she said.

A volunteer in local youth sports and scouting, she praised the City’s parks and sports fields, pledging to “ensure it continues down this path.”

Kalasho, who grew up in Santee and owns the Sonik Car wash and the Chevron gas station, also cited “financial stability in a depressed economy” as the city's top need.

Qualin, senior vice president of KPS Insurance Services, Inc., holds a degree in Finance. “Until the economy turns around, the city will be faced with trying to increase revenue or cut costs,” he said. 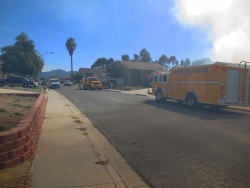 Ryan, a longshoreman and former planning commissioner, answered that the biggest issue facing the city is “balancing the budget while continuing to provide the quality of life Santee residents have enjoyed and deserve, such as great parks and recreation programs along with continued excellent law enforcement and firefighting efforts.”

McNelis said the biggest issue is stopping the expansion of the Las Colinas Detention Facility, the county's jail for women, located in Santee.

Instead of responding to East County Magazine's questions, Minto submitted a copy of a survey he had completed for another publication, so the queries were not posed in exactly the same way, but he, too, mentions the economy as an issue for San Diego County as a whole. The incumbent cited completion of Town Center Park, sponsorship of measures to restrict alcohol consumption in parks and protect children from sexual predators as among his key accomplishments. 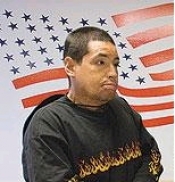 Reyes answered the questions by phone interview because his fingers, badly burned along with 70 percent of his body in the 2003 Cedar Fire, don't type well.

Since that blaze, which killed 15 people, Reyes has kept two issues before the public: the need for protection against fires, and the legal procurement of medical marijuana, which has helped to ease his pain.

Fire protection is a burning issue for Reyes. “Yesterday we had a rehash of the Cedar Fire,” he said, speaking at a picnic the day after the nearly 1,000 acre Monte Fire began in neighboring Lakeside. He cited failed leadership to bolster City fire protection and suggested the City look into hosting a public event to raise more money for fire services. 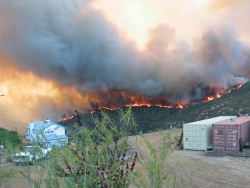 Reyes said he is not Native American but he was living near the Barona reservation when, after helping to evacuate family members, he almost lost his life to the conflagration.

Reyes calls himself an archaeologist, educator and reverend “for a multidenominational church.”

Noting that Santee once led the nation in cleaning its own drinking water at Santee Lakes, Reyes proposed a “water farming” project (plastic lines with slits to collect water from dew that normally evaporates), a technique he learned while doing archaeology in the Andes Mountains. He also proposed a community garden and incentives for Santee residents to install solar panels to produce more power locally.

Two recent hot topics got mixed reviews from some while others didn't comment.

Some thought Fanita Ranch, a larger residential development which may be coming out of bankruptcy, is a good idea.

“I would like to see the Fanita Ranch development plans go forward,” Croce said.

Ryan said 70 percent of Santee voters approved the project, indicating it should be completed, if possible.

”I believe that we should build Fanita Ranch,” Qualin said. “not only do we need to provide more-up housing for our current residents, but we need to attract other families from other cities to move to Santee.”

But Reyes feared the project has poor access and would be a fire hazard. Kalasho believes the project could be a failure in these financial times and that it should be reconsidered by Padre Dam. 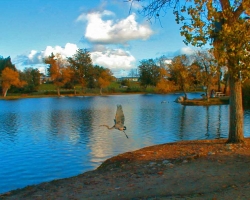 As for the Santee Lakes Cable Ski Park project, which would permit a waveboard to skim the water pulled by an overhead cable, Ryan said it “would be a wonderful addition maybe even with a restaurant.”

Enright said she attended the Council hearing on the project and was impressed by the “impassioned please by people who live here. There was two and a half hours of testimony from people who live in Santee, but I could tell that Council had already made up their minds.” Enright said the ski park would hurt the natural setting and imperil wldilife, also raising safety issues. “It would cost over $100 for a family of four to enjoy a day,” she added.

Minto was not so sure. He voted against the project, which was approved 3-2.

“The Cable Ski Park is an interesting and complex issue.,” he said. “I listened intently to the proposal and to the people testifying. I even kept a tally of who was from Santee, where they lived in Santee, and then who was not from Santee. The greatest weight to testimony for me came from the people living in Santee. 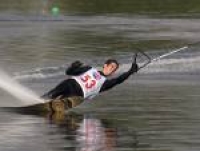 “After listening to the testimony, it came down to a comment made by one of the residents... He pointed out the General Plan approved just a few short years ago, and fought so hard to preserve with Proposition X required Santee Lakes to remain a park.”

“ Even though I thought the Ski Park is a good idea, I had to ask myself, 'Why didn’t we look at placing an overlay on this property when we approved the General Plan update?”' The only thing I could come up with is that the citizens involved with the planning and the Council members did not expect the lakes to change. Therefore, I felt that we should honor the General Plan and not grant the conditional use permit.

“Since the permit has been granted, I feel it is our job as the planning commission and Council to make sure the best and safest project is built.”

On the surface it sounds like it could be a good thing for Santee , Qualin said. “but I haven't been able to hear both sides of the project in detail. For example I do not know how the traffic would impact that part of Santee, How it would disturb the residents in that are, what is the full economic impact to the City, etc. I think you need to get the full picture before making a decision like that.

“I think the city of Santee and Padre Dam water district should rethink it,” Kalasho said. “In these economic times,” he said, “the last thing we want is for the ski park to go in and fail.”

But Reyes had a different take on the subject, saying that when the freeway allows traffic to bypass the road, local businesses will suffer.

Groce lost a campaign for the board of the Grossmont Union High School District in 2006, and Reyes lost a race against incumbent County Supervisor Dianne Jacob in 2008. He has vowed to try again in two years.

Reyes said public service is his way of paying back all that everyone did to save his life after the fire and “to make sure that what happened to me does not happen to anyone else.”

To learn more about the candidates, visit their websites at:

Note: All candidates were asked to provide a website address and photo. Routine background checks turned up no major issues of concern.