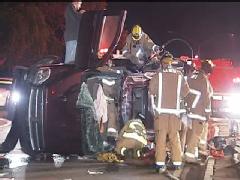 The children, ages 1, 3 and 7, were taken to Rady Children’s Hospital. One of the youngsters was reportedly ejected from the SUV.

ECM News partner 10 News reports that the male driver, 18, is suspected of driving under the influence of alcohol, according to San Diego Police Officer Dino Delimitros.