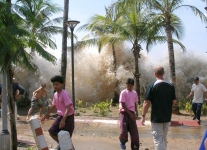 April 21, 2015 (San Diego)—Scientists studying the Ventura fault north of Los Angeles have concluded the fault line is more dangerous than previously thought.  Now, seismologists have concluded the Ventura fault could produce a quake measuring 8.0 on the Richter scale – along with a tsuami capable of inundating coastal areas of Southern California, affecting hundreds of miles.

Tsunamis were previously believed to be impossible from a quake originating in Southern California, since the San Andreas and other faults in the region are too far inland to impact the oceans.

While a major quake in Alaska could cause a tsunami to reach California, residents would have hours to evacuate. But if a mega-quake strikes the Ventura fault, there could be very little warning time before a monster wave would hit the shore.

That’s troubling for residents, and also a serious concern should a tsunami sweep over stored radioactive wastes at nuclear reactor sites on the coast.

Geologists have found evidence that a major quake has occurred in the Ventura area about 800 years ago, the Los Angeles Times reports.

The research on the Ventura fault was done by scientists from San Diego State University, USC, Harvard University and the U.S. Geological Survey. Scientists used underground oil data, earth imaging technologist and research on ancient beach mapping in the study.  They created an image of the fault using a seismic reflection technique.

The researchers found the fault is deeper than originally believed.

They also learned that the fault is connected to a network of other faultlines, so if a major quake strikes Ventura, it could trigger a mega-quake, rattling fault lines in neighboring Los Angeles and San Bernadino counties.

So how big is a mega-quake?

A mega-quake along this fault system would produce 32 to 126 times more energy than the devastating 6.7 Northridge earthquake back in 1994.  Shaking could last up to three minutes – and power from a mega-quake can be so intense that soil can liquefy, causing trees to be sucked down or fall over.

The world’s largest tsunami wave, which struck Lituya Bay, Alaska in 1958 measured a staggering 1, 720 feet high, sweeping over islands and uprooting millions of trees, along with 40 million cubic yards of rock.