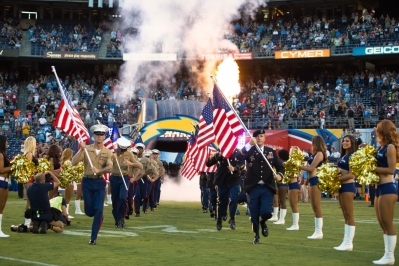 The 9ers took a 6-0 lead in the first quarter on a one yard run by DuJuan Harris.

But in the second, the Chargers tied it up on a touchdown from Naval reserve Chargers player Chris Swain.  The extra point from Josh Lambo gave the Bolts the lead at 7-6.  But right at the end of the first half, Phil Dawson’s 32-yard field goal was good and the 9ers hopped over the Bolts 9-7.

But the Chargers went right back to work in the second half with a touchdown by Kenneth Farrow, good for six yards and the Chargers led 14-9.  With seven minutes left in the third, Marc Bercovici threw a nice pass over the middle to Isaiah Burse for a 17-yard touchdown reception.  The extra point was good and the Chargers took a whopping 21-9 lead. 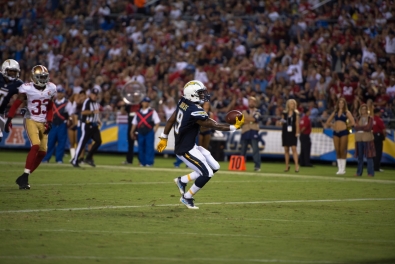 The 9ers got another one in to make it a one-score game in the fourth when Christian Ponder QB sneaked the ball in for a touchdown.  21-16 was the score.  Ponder did it again after a fumble by Bercovici forced by Marcus Rush to give the visitors the lead.  The two-point conversion was good and the 9ers led by a field goal, 24-21, with three minutes left in the game.  They added their third touchdown of the quarter with a 10-yard run by Kelvin Taylor to give the 9ers a 31-21 win.  The Chargers finish the preseason 1-3.

The Chargers start the regular season next Sunday at 10:00 a.m. against the Chiefs.