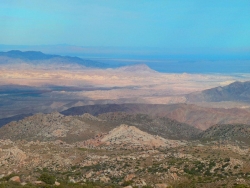 The court, however, instructed plaintiffs (the East County Community Action Coalition, Backcountry Against Dumps and the Protect Our Communities Foundation) to first file for a stay in district court. Judge Roger Benitez will hear the motion for injunction pending appeal on August 12.  If denied, plantiffs may then refile with the Ninth Circuit, Laura Cyphert, cofounder of the ECCAC, has informed ECM.

“I am very optimistic, and believe we are very close to getting our stay,” said Cyphert. “Timing depends on the speed of the courts.” The group is actively raising funds to support the legal battle at www.protectourcommunities.org/support-poc/.

ECM has requested comment from SDG&E and will publish the company's response if received.