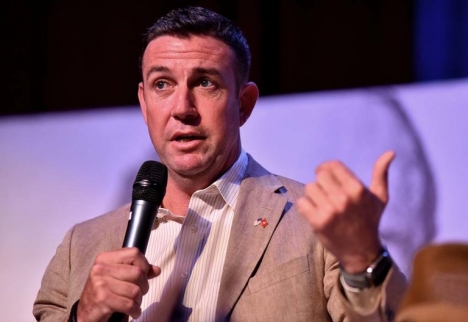 Photo:  Rep. Duncan D. Hunter, 42, will have to make his case in the 9th Circuit in December. Photo by Ken Stone

September 26, 2019 (San Diego) - Rep Duncan D. Hunter will get a shot at arguing for dismissal of his corruption charges in the 9th U.S. Circuit Court of Appeals.  But government prosecutors got their way on the time frame.

An expedited schedule sought by the San Diego U.S. Attorney’s Office was granted Wednesday, with a three-judge panel saying oral arguments will be heard in December — ahead of a scheduled Jan. 14 trial in downtown federal court.

Still, Judges Kim McLane Wardlaw, Jacqueline H. Nguyen and Andrew D. Hurwitz said they won’t decide whether the San Francisco-based 9th Circuit has jurisdiction of the appeal until the case is heard.

At issue is whether the government violated the East County Republican’s rights under the Speech or Debate Clause of the Constitution — which bars prosecution of federal lawmakers for “legislative acts.”

Hunter, who represents the 50th District and pleaded not guilty, was indicted along with his wife on five dozen criminal counts, including wire fraud, conspiracy and falsification of records after allegedly spending $250,000 of campaign donations on personal items and vacations.

Margaret Hunter, 44, pleaded guilty in July to a conspiracy charge.

Two former San Diego U.S. attorneys were quoted by NBC San Diego as saying the appeal could force the trial to be delayed until after the March 3 primary election.

Former U.S. Attorney Carol Lam told the station that Hunter’s trial could be postponed up to 18 months.

And former U.S. Attorney Chuck LaBella said: “I don’t think anybody can predict that the panel is going to rule quickly. The government would like that, but there is no guarantee.”

On Thursday, former Rep. Darrell Issa is expected to announce a run for Hunter’s seat, joining former San Diego Councilman Carl DeMaio and state Sen. Brian Jones as Republicans in the field. Ammar Campa-Najjar, who lost to Hunter in November by under 4 points, is the lone Democrat in the race.

Judges Wardlaw and Nguyen are based in Pasadena, and Hurwitz works out of Phoenix. Wardlaw was appointed by President Clinton and the others by President Obama.

Besides arguments already filed, both parties were invited to file supplemental briefs within 14 days.