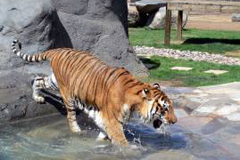 September 17, 2008 (ALPINE) – Q: What happens when you take four captive-bred tigers and turn them loose in a facility large enough for them to run freely for the first time?

A: A cat-aclysmic event complete with romping, frolicking and caterwauling, much to the delight of media members and donors invited to watch the grand opening of Tiger Trails in Alpine.  View our short video clip.

On October 4th, the haven will host Between the Stripes, a fundraiser featuring silent and live auctions, dinner, and “up close and personal” visits with the big cats. 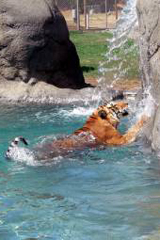 “I’m like a kid in a candy store,” Brink said in anticipation of the tigers’ release into the new enclosure, which was built with donations from community members and volunteers.  Visits are restricted to members by appointment only—a treat for guests who get “up close and personal” views and in some cases, an opportunity to feed tigers, lions or other big cats with special feeding poles.

Raja and Natasha, the first two tigers turned loose in Tiger Trails, were rescued by Brink from an owner in Texas who kept them confined in a six by twelve foot cage with no shade or shelter. “They had to step over each other just to get food,” said Brink, a horse trainer who worked at a similar rescue facility in Texas before acquiring land in Alpine.  Natasha was pregnant when acquired and gave birth to Sitarra and Tabu soon after her arrival, although Lions, Tigers and Bears is a no-breed facility.

Here, the tigers lived in larger cages with shelters, received limited exercise and toys, but never had room to run freely—until now.   Ten-year-old Natasha sauntered in and broke into a run, clambered onto rocks and sprawled out beneath the shade of a climbing structure, gazing up at blue sky without bars to obstruct her view.  Raj, 11, surveyed the perimeter, entered a cave and peered out at visitors from behind a water fall.  Later, the 550-pound male Bengal tiger dipped a cautious toe in a wading pool, then plopped down in the cool water.

The five-year old cubs frolicked more boisterously than their parents, playing like over-grown kittens before one discovered the pool and jumped in.  Talk about making a splash!   Later Raj, too, dived in.   The tigers’ body language and expressions epitomized sheer joy – like a housecat savoring a catnip mouse – as they swam and splashed beneath water spilling off surrounding rocks. 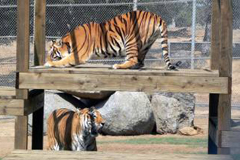 Established five years ago, the non-profit organization recently received permit approval to build a second exercise area, more big cat enclosures and an educational facility on the 200-acre site.  Lions, Tigers and Bears currently has a veterinary surgery center as well as enclosures that house three young lions, a leopard, bobcat cubs, a serval, four tigers and the latest addition, a mountain lion.

Unlike most animals here, the mountain lion had not been captive, abused or injured.  But after the lion repeatedly leaped fences to attack dogs, then wandered into a schoolyard, Fish & Game Authorities captured it and first considered euthanizing the animal before allowing Brink to offer the lion a permanent home.

“We can’t let the mountain lion or the leopard into Tiger Trails,” said Brink, explaining that those animals could climb out.  Ultimately she hopes to raise funds to build a second enclosure designed as an exercise area for climbing cats, including small felines such as bobcats as well as mountain lions and leopards.

Lee Yacullo, a volunteer who gave up working shows at the Wild Animal Park to assist Brink with rescue work, wasn’t sure how the tigers would react to Tiger Trails—particularly Natasha, who was declawed by a former owner and has problems with her paws.   But after watching the big cats in action, Yacullo exclaimed, “To see them run – that was just beautiful!”

For more information on becoming a member, volunteering, donating or attending the October 4th fundraiser, visit www.lionstigersandbears.org/pages/events/events.php or call (619)659-8078.  You can also find information on this and other events at our calendar our calendar.

Editor Miriam Raftery is a national award-winning journalist and owner of two housecats who would no doubt view Tiger Trails as the ultimate cat’s meow.

Thank you for this article and the link to their web site. As an animal lover (especially BIG cats), this gave me hope and warmed my heart! Opening a sanctuary for animals is a dream of mine. Your article gave me inspiration and hope for the animals. By the way, don't forget to vote YES on Prop. 2 (Prevention of Farm Animal Cruelty Act) in November.