June 9, 2014 (San Diego) Imagine if you will, going to the doctor and not understanding what your doctor is telling you. Worst, imagine if you will, an EMS crew taking you to the Emergency Room, a life or death situation, and again you are not being able to understand what language the EMS crew, or later the hospital, is speaking.

When your family comes, and this is a worst case scenario, they also do not fully understand what medical personnel are telling them. This makes both decision-making and medical care challenging, with at times very negative outcomes. 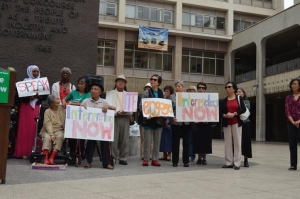 These include the young Somali refugee who has to fight with her mother’s doctor, who tells her mother that if she does not take her medications correctly, she will die. Her mother does not understand the full set of phrases and understands this as she is going to die. This leads to unnecessary fear and panic. Part of the problem is that the translator, when present, speaks a form of Somali that the immigrants do not necessarily understand.

It requires, beginning July 1, 2015, CommuniCal to offer medical interpretation services to Medi-Cal providers provide services on either a fee-for-service or managed care basis.”

According to Amanda Ream, the Policy advisor for this political campaign from the American Federation of State, County and Municipal Employees, would be funded using Federal dollars that have already been assigned to programs like this. The only thing missing is Governor Jerry Brown requesting these funds. In her opinion, the Governor has not done that out of a fear that this might be construed as a new program. But the Federal funds are there for the taking.

Council Member Marti Emerald pointed to the people behind her, a small representation of the large number of immigrant and refugee communities that have settled in San Diego. She said that “in city heights, one of the neighborhoods I represent, there are approximately sixty languages and separate dialects spoken in our schools, in our stores, in our doctor’s offices.”

She added that there are very few translators to help these refugees understand what their doctors are telling them. Or worst, “explain to their doctors what their symptoms are.” According to Emerald this this a problem, not just in San Diego, but across the state. After the Press Conference was over, we talked about the El Cajon Chaldean community. She told ECM that she intends to write another letter to the Governor, but that the problem is extensive.

Carl Li, a businessman and immigrant said that when his father was in the hospital, before he passed, it was difficult for him to communicate. He also said “we are getting together every day, every night to get this bill passed.” He added that volunteers are making sure they reach to every group, every language group, “down in San Diego, all the way to Sacramento.”

This is an effort to put pressure on the Governor, and to make him realize that “we mean business.” He added that if the Governor does not agree, then they will continue to work until he does.