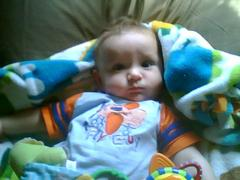 June 19, 2013 (Valley Center)--A five-month-old baby abducted in Valley Center by a domestic violence suspect was found safe hours after the abduction, the San Diego Sheriff reports. A countywide amber alert issued for suspect Kenneth Nusun Welch has been cancelled. The suspect in this case was taken into custody in Vista just before 10:00 a.m.

The incident started just before 2:00 a.m, when deputies in Valley Center responded to a domestic violence call on Poomacha Road. Deputies found an injured woman. She was taken to a hospital with life threatening injuries. Deputies also learned the woman's boyfriend, Kenneth Wayne Welch, snatched their five-month-old son and threatened to harm the baby.

An investigation continues into this incident.