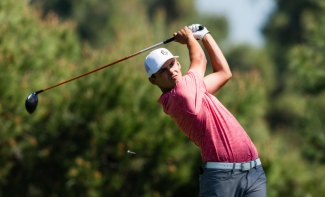 October 29, 2017 (Princeville, Hawaii) - San Diego State’s Blake Abercrombie (Rocklin, Calif.) shot a 7-under-par 65 on Sunday to lead the Aztec men’s golf team during the opening round of the Warrior Princeville Makai Invitational on the island of Kaua’i.

With his total, the SDSU senior finds himself in a four-way tie atop the individual leaderboard, along with Nicolas Platret of Louisville, Jamie Stewart of Missouri and Devon Bling of UCLA, heading into Monday’s second round at the par-72, 7,223-yard Princeville Makai Golf Club.

Abercrombie suffered just one blemish on his scorecard—a bogey-5 at No. 10—but made up for it in a big way with four birdies and a pair of eagles on the par-5 18th and the par-5 11th. Among his birdie conversions was an impressive drain on the par-3, 255-yard 13th, which ranked as second-toughest green of the first round. As a result, Abercrombie matched his career-best for 18 holes, which is also tied for eighth place in program history.

As a team, the Aztecs posted a combined 14-under 274 to finish the day in third, eight shots behind front-runner Louisville (-22) and four strokes in back of second-place Missouri (-18), while UCLA (-9) sits in fourth, followed by Washington (-8) and Sam Houston State (-8).

In addition, sophomore Trevor Norby (Carlsbad, Calif.) and freshman Zihao Jin (Beijing, China) remain in a tie for 13th after each carded a 3-under 69 on Sunday.

Norby played spot-free golf in the opening round, logging 15 pars, which ranked second in the field of 112 golfers at the end of the day, to go with a trio of birdies, including a successful make on his final hole of the afternoon at the par-4, 338-yard No. 14.

Meanwhile, Jin led the SDSU with five birdies to offset two bogeys in his very first collegiate appearance.  The Rancho Bernardo High alumnus was even through his first nine holes, but played exceptionally well down the stretch, sinking three birdies on his last four greens, including back-to-back drains at No. 11 and No. 12.

Jin’s prep teammate Steve Sugimoto (San Diego, Calif.) also earned his first varsity start this week, carding an opening-round 71 to finish the day in a tie for 34th. The Aztec freshman countered three bogeys with four birdies of his own, including three on his front nine.

Rounding out the SDSU delegation was PJ Samiere (Kailua, Hawaii), who returned to his home state for the first time in collegiate competition, shooting an opening-round 73 to land in the 54th position. Despite four birdies, including three after the turn, the Aztec senior was plagued by three bogeys, as well as a double on the par-4, 446-yard No. 6.

The Princeville Makai Invitational resumes on Monday when San Diego State tees off alongside Louisville, Missouri and UCLA for the second round, beginning with a shotgun start at 8 a.m. HT/11 a.m. PT.