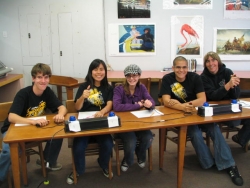 The moderator for today’s Grossmont Union-High School Academic League Match pitting the Granite Hills “Eagles” against the El Capitan “Vaqueros” was Valhalla math teacher extraordinaire Brian Andersen. He kept the match moving and in good order with a good sense of humor. 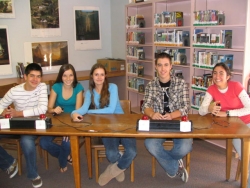 In Junior Varsity competition the Eagles pulled out a last minute win with a score of 82 over a very competitive Vaquero squad with 67. In Academic League competition that is the difference of one 3 point Toss-up question and a 5 point Bonus question that could’ve gone either way! The crowd of over 40 parents and students were at the edge of their chairs right up to the buzzer ending the 25 minute match. 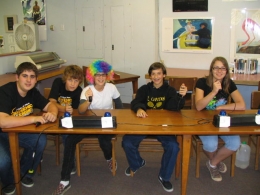 El Capitan JV, coached by Dena Rosenberger, was led by captain Joseph Boman who was quick to the buzzer and answered a lot of questions. Tyler Campbell and Abby Brown were of great assistance as well.

In the Varsity Competition, El Captain, also coached by Dena Rosenberger, got off to a quick lead that they never relinquished. Led by captain Annica Redmond with strong support from Brendan Price and Kaitlyn Chung, they racked up 93 points after 35 minutes of competition. 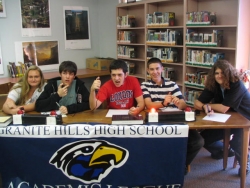 Ron Whitney coached the Varsity Granite Hills squad with co-captains Brian Smart and Gavin Brown. Paul Rothstein accounted for quite a number of correct answers to help his team get 53 points.