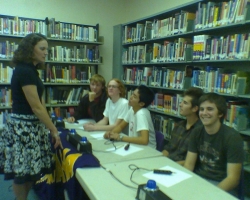 December 9, 2009 (San Diego’s East County) -- The layoff for Thanksgiving did not slow up the four teams in week four’s featured match with the Santana “Sultans” hosting the Grossmont “Foothillers”.

In, fact all of the teams got right down to turkey…pardon the pun…from the very opening question right down to the last one. They were amazingly, evenly matched teams! 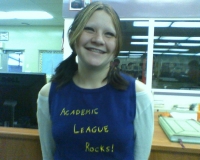 In Junior Varsity action, with 11 minutes left in the 25 minute match, a time out was called to substitute players. The score board read: Grossmont, 41 and Santana, 50. The Sultans, coached by Ms. Brooke Crocker, and captained by Garet Webster with able assistance from Nate Tessin and Karen Wolfe pulled ahead with 7 minutes left and never looked back. That is not to say that the Foothillers, coached by Ms. Brianne Jones, captained by Patricia Tan and supported by Forest McKenzie did not make a super effort to try and catch up. Of special note, Emily Harris, from Grossmont, sported a neat team shirt that read: “Academic League Rocks”, along with pom poms.

In Varsity action, while Grossmont got off to a early lead, Santana kept crawling back to bring the score within 15 points (GHS, 95 and Sant., 80) with 6 minutes left in the 35 minute match. With 2 minutes remaining, the Sultans pulled ahead of the Foothillers. It was now nail biting time for 1st year GHS coach Brianne Jones and long time Sultan coach Brooke Crocker. With less than a minute left, Grossmont got the Toss-up question correct and pulled to with 4 points of taking the lead again. Time ran out during the 5 point bonus, and the Grossmont team was unable to answer the 3 part question correctly. This left the final score: Grossmont 101 and Santana 105. These are really high points scored by two teams in any one match and it was sad that one of the teams had to lose. 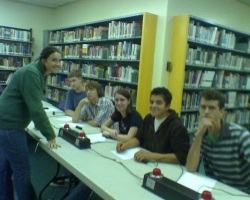 Grossmont was very skillfully led by captain Stina Schwebke with strong assistance from Eric Wilkins and David Taylor. For its part, Santana was captained by the very able Scott Hung with a great team effort by Thomas Bennett, Jason Toma, Ian Davies and Connor Wilson. Moderator and Social Science teacher Ms. Michelle Tribble kept the match moving with humor, alacrity, and superior judgment. The audience of over 35 people were enthralled by such well matched, well informed teams. And while Academic League matches are free, the keen level of competition displayed by these fine young people could have resulted in charging admission with no one asking for their money back!

In other match news:

Moderator and retired GUHSD Librarian Cathy Tschiltsch reported that the Helix at El Cajon match had a standing room only audience.

Moderator Brian Andersen reported that his two matches featuring Monte Vista at Steele Canyon were very close ones, with the varsity match 10 points apart with 5 minutes left in that match.