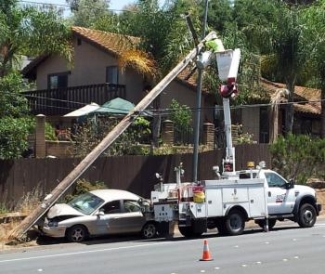 April 28, 2013 (El Cajon ) – A brown Ford car has crashed into a power pole on Jamacha Road at Kendrick in the Granite Hills area.   Power lines are down.  An outage is affecting 1217 homes in the Granite Hills, Bostonia, Singing Hills and East El Cajon areas, according to the SDG&E website.

“The driver was not injured,” said Paul Kruze, an ECM photojournalist at the scene.  “Heartland Fire is on scene due to the risk of fire.”

El Cajon Police are rerouting traffic off of northbound Jamacha.  Avoid this area.

SDG&E estimates power should be restored at 4:03 p.m.

A second outage of undetermined causes is also listed on the SDG&E website for the Jamul and Lawson Valley areas, where power is expected to be restored mid-afternoon.