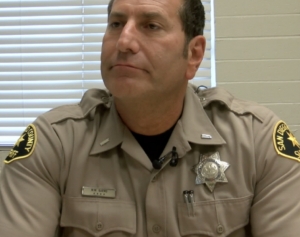 December 2, 2022 (Rancho San Diego) – Waiel “Will” Anton, an associate of disgraced former Sheriff’s Captain M. Marco Garmo, has been sentenced to one year in prison for corruption after pleading guilty to two counts of obstruction of justice.

Garmo, who formerly headed up the Rancho San Diego Sheriff’s station, is serving a two-year prison sentence after he pleaded guilty to gun trafficking and corrupt conduct in September 2020.  Prior to his arrest, Garmo had harbored ambitions of running for Sheriff. In describing the larger case against Garmo and all of his co-defendants, U.S. District Judge Gonzalo Curiel observed that, “had the [federal] government not conducted this investigation and prosecuted Captain Garmo, there was a possibility that we would have had one of the most corrupt government officers ever leading the San Diego Sheriff's Department.”

In pronouncing sentence on Anton, Judge Curiel emphasized that “the public is entitled to honest services by government officials.”

According to the U.S. Attorney’s office, Anton admitted collecting cash payments from the operator of several unlicensed marijuana dispensaries in exchange for tipping them off  of impending searches by law enforcement, and for continuing to obstruct justice with the same dispensary operator while Anton was on federal pretrial release in one of his criminal cases.

Although he was never a San Diego County Sheriff’s deputy, Anton was a close associate of Garmo.

In his plea agreement, Anton admitted providing supposed “consulting” services to multiple operators of unlicensed marijuana dispensaries between January 2017 and February 2019.  In particular, Anton collected a fee from the operator of the lucrative “Empire” dispensary in Spring Valley—a region then included in Garmo’s jurisdiction. In return for regular cash payments, Anton provided the operator with advance warning of planned Sheriff’s Department searches of the operator’s business locations, information which Anton received from Garmo.

Anton’s text messages with Garmo reveal the pair discussing a Sheriff’s search of the Empire operator’s competition in May 2018.  Garmo reported to Anton that he had instructed his lieutenant to search another illegal dispensary located close to the Empire operator, in order “to scare the fuk outta [him] lol.”  Anton responded: “Fuck yeah gman” and “Close them all,” but Garmo wrote back “$$$,” apparently reminding Anton that their focus was Anton’s ongoing profit-making scheme rather than legitimate law enforcement.  Anton replied: “I got you.”

In his own plea agreement, Garmo had admitted tipping off a different illegal marijuana dispensary part-owned by his cousin in July 2018, before a separate putative law enforcement search.

At about the same time, Anton ran a different “consulting” venture for applicants for County permits to carry a concealed weapon (CCW).  Per court records, in exchange for substantial fees, Anton would help his applicants submit their CCW paperwork and secure early appointments with civilian County staff.  In his guilty plea, Anton admitted making an illegal $100 cash payment to a county clerk who ensured favored treatment for his CCW clients.  Garmo admitted in his own plea papers that his role in Anton’s scheme was to refer CCW “consulting” clients to Anton in exchange for kickbacks of $100 apiece.

In February 2019, Anton met with an undercover agent from the Bureau of Alcohol Tobacco Firearms and Explosives (ATF), whom Garmo had referred to Anton after selling the undercover agent a pair of off-roster handguns.  In exchange for a $1,000 cash payment, Anton called the Licensing clerk whom he had paid off and secured a two-week CCW appointment for the agent instead of the eight-month wait available to the public. During their meeting, Anton bragged that he would become the head of Sheriff’s Licensing after Garmo was elected Sheriff.

After ATF and FBI agents searched Anton’s home on February 13, 2019, Anton placed an unsolicited call to the undercover agent.  During the call, Anton admonished the agent nine times in six minutes not to tell federal agents, if questioned, that he had paid Anton any money as part of their deal. As admitted in his plea agreement, Anton added that the undercover agent should falsely claim that he and Anton were friends and business associates.

In March 2021, while on federal pretrial release for his criminal case with Garmo, Anton met with the owner of the unlicensed “Empire” dispensary to offer his services once again.  As admitted in his plea agreement, Anton met the illegal dispensary operator in a parking lot and showed him a page of Anton’s criminal discovery in violation of a court order.  In exchange for another $5,000 in cash, Anton told the operator who to stay away from because they might be cooperating with law enforcement.

Court documents show that Anton was able to commit these offenses because his associates perceived him as almost a police officer himself.  For example, Anton promised to “send a unit”—i.e., a marked police car—to a local businessowner complaining about a homeless person frequenting his shop.

“Proximity to power is not a license to break the law,” said Attorney for the United States Rebecca Church. “Anton leveraged his image as an apparent law enforcement insider to obstruct and subvert justice and to line his own pockets with criminal proceeds. This office will not tolerate unlawful corruption in any form.”

Anton was ordered to forfeit five firearms that he admitted were involved in a violation of criminal law for purposes of forfeiture.  In total, approximately 302 firearms and 131,458 rounds of ammunition have been forfeited as part of this investigation.  Anton was also ordered to pay a fine of $56,215.

Church praised the talented and dedicated investigators from the ATF and FBI who have worked on this case.  She added that the U.S. Attorney’s Office wishes to once again extend its sincerest gratitude to the San Diego County Sheriff’s Department, without whose referral this case would not have been possible.  Church also thanked the Sheriff’s Department for their assistance and support throughout the course of the investigation.

“Individuals who knowingly participate in firearms trafficking schemes must take accountability for their role in aiding individuals who acquire firearms illegally,” said Bureau of Alcohol, Tobacco, Firearms and Explosives Special Agent in Charge Monique Villegas. “This complex investigation involving multiple defendants was made possible by the cooperation and collaboration of our federal, state, and local law enforcement partners. We have effectively disrupted yet another firearms trafficking operation.”

“Mr. Anton often purported to be a law enforcement officer and exploited his access to law enforcement information and influence for his own personal gain,” said Stacey Moy, Special Agent in Charge of the FBI San Diego Division. “Today’s sentencing serves as a reminder that the FBI will continue to work with our law enforcement partners to investigate corruption and ensure those who violate the law will be held fully accountable.”

Per the U.S. Attorney’s office:

Leo Joseph Hamel, 65 years old—sentenced to one year of probation and 100 days of house arrest, forfeiture of 229 firearms and 126,073 rounds of ammunition, following felony guilty plea