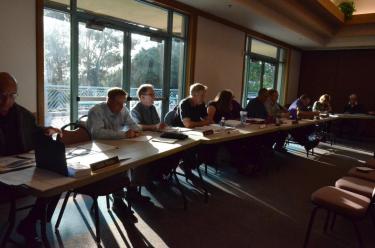 April 26, 2013 (Alpine)—A meeting of the Alpine Planning Group this week grew heated as Lou Russo, a long time member of the group, raised conflict of interest complaints stemming from the San Diego Powerlink against fellow members. Russo also sought to have two subcommittee members removed over failing a fire inspection at their propertly.

Mike Milligan stated that he would “tender my resignation” if the attacks continue over Powerlink, adding, “It’s stupidity beyond belief.”

He added, “It is totally unprofessional and Mr Russo should tender his resignation.”

Similar allegations previously led to the resignation of member George Barnett, who later rescinded his resignation after the Chair refused to accept it back in 2011:  http://www.eastcountymagazine.org/node/7362

Milligan’s feelings were echoed by newly appointed member Leslie Perricone, who said, “We are public officials and should act professionally.” 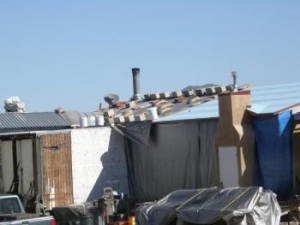 Russo also sought to have two volunteers serving on a subcommittee, Clark and Robin Williams, removed. Russo provided evidence to the board and media that their property has not yet passed County building inspections on their home (photo, right) and argued that this should disqualify them from serving on a subcommittee. The board decided to delay the decision on actually consulting with the county until next meeting when the Williams should present their case.

Russo agreed to this delay , as long as the new information he brought was considered.

Robin Williams has spoken with ECM after Russo raised these issues in March. She suggested that Russo may have an ulterior motive, since he supports the Covert Canyon facility adjacent to their property. The Williams have been outspoken in their opposition to the facility, which has drawn its own share of controversy, most recently over allowing shooting of live pigs for military medic training.  She contends that the greater fire hazard is posed by the live-fire operations that were occurring at Covert Canyon. Covert Canyon's owner, who has faced his own set of regulatory compliance issues, has claimed the activities posed no risk of fire danger.

As for the failed fire inspection, she has said some improvements have been made and that photos distributed by Russo showing clutter and other issues were old. She promised to send new photos, but has not done so. 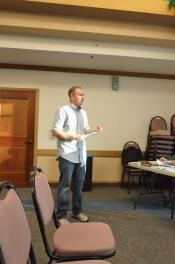 “I’m looking at filing civil charges against Lou Russo because of slander,” she told ECM.

The documents provided by Russo did, however, indicate the Williams’ Alpine residence is not in compliance with county requirements.

Barnett then said something that helped to lower the temperature of the meeting, if by a few degrees. “As we seat here, we are in any way encouraging people to apply to serve.”  The audience broke into a healthy laugher.

As for Russo’s allegations over the Sunrise Powerlink Route, he contended that some members benefitted, suggesting conflicts of interests.

Vice Chairman Travis Lyon (photo, left)countered those charges by going into the time line, and how Russo should apologize. According to Lyon the material presented by Lyon in open meeting last month was slanderous. He went into the issue at the heart of it, the meetings that were held to write letters to prevent the southern route from being enacted. Nobody wanted the Southern Powerlink route and it has affected the community, and has done damage, it was noted.

Russo said that he presented those letters as a private individual, not a member of the committee. 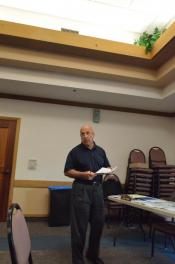 Lyons reminded Russo (photo, right) that when the Powerlink was approved he was a member of the committee.

Russo countered that at the very least the problems raised were ethics violations.

This led to a vote on whether to keep the communications committee open and a discussion arose over the APCG’s website issues. Russo believes that websites are essential for modern government, and while Lyon agreed, he pointed out that there was no money from the county to fund a website for the APCG. The website recently used was run by a private party, Russo, which could cause a conflict of interest.

Russo said that relying on media for outreach was not a good idea, since media might have their own agenda.

The Board voted to keep the communications committee, which Russo leads, by one vote.

Archer, Barnett, Dabbs, Lyon (who made the motion), Perricone, and Self voted to abolish the communications subcommittee.  Easterling, Garay, McDonough, Milligan, Myers, Russo, and Whalen voted to keep it.  Saldano and Thomas were absent.

They also voted to change the agenda format, which will now contain links to the County repository of agendas and minutes, and also list every member’s name and e-mail address.

On substantive issues, the APCG also voted to tell the county to go ahead with a cleanup of zoning regulations. The first is on Willows Road at the end of Alpine Boulevard. It was changed from SP-1 to SP-4 and the residents would like the Planning group to recommend to County to change it back to the previous standing.

Members also voted to send a letter to the Department of Public Work, regarding the repairs that SDG&E needs to cover over the damage done by the Powerlink.

The other significant decision had to do with the 2013 cleanup of the General Plan. As Chairman Jim Easterling pointed out, these are minor changes not requiring an Environmental Impact Report. Public comments are open until May 20 at the close of business day, but the County has agreed to keep it open until the end of May.

Sharon Haven represented Lyle Morton, a property owner who could not be at the meeting since he was out of state. The board voted unanimously to confirm the recommended changed from light industrial to commercial for Morton’s two-acre parcel.