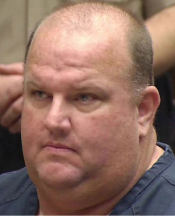 September 30, 2014 (San Diego’s East County)--At the El Cajon courthouse on Monday, a man accused of murdering his wife and dumping her body in the Anza-Borrego Desert seven years ago pled not guilty to the crime.

His wife, Fumiko Ogawa, was last seen in January 2007 at the couple’s home in Point Loma. Simoneau never reported his wife missing and told neighbors she had moved to Hawaii.

He had filed for divorce, 10 News reports, but delayed the action after his Japanese wife inherited a substantial sum of money.  After she went missing, he reportedly went on a shopping spree, buying boats, Land Rovers and a Hummer.

A few weeks after her disappearance, Ogawa’s remains were found by a couple going camping in the desert. However the remains were not identified until over four years later, in June 2011, and it took another three years to identify the suspect and build a case to bring him to justice.

Judge Laura Halgren set bail at $5 million.  The next court date will be October 8th, for a scheduling discussion. If convicted, Simoneau could spend the rest of his life in prison.