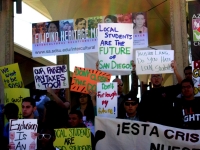 In an effort to better understand who SDSU consulted with prior to eliminating the local admissions guarantee, the Education Consortium submitted a public records act request in October. What they got back was over 2,000 pages that failed to include significant documents encompassed in the request, according to a press release issued by the ACLU.

Chief among the missing documents are records of an enrollment management plan and any consultation with the CSU Chancellor’s Office or SDSU’s Enrollment Management Advisory Council (EMAC) prior to eliminating the local guarantee. “The only mention of the local guarantee that we see in the records occurs after President Weber announced he was eliminating it on September 21, 2009,” stated Leo Carrillo, the lead organizer for the Education Consortium. “It’s hard to believe there was no plan and no consultation, and even harder to believe there are no records of them.”

“CSU policy requires the university to form a long-range plan that, among other things, addresses service to the local area. It also requires the university to consult with both the Chancellor’s Office and with EMAC before it changes the admissions rules abruptly. Otherwise, SDSU must give the public 12 months notice,” said Dr. Isidro Ortiz, who was instrumental in negotiating the 2002 CSU policy and served on the EMAC for several years. Now Vice Chair of the Education Consortium, Dr. Ortiz added, “We, like the San Diego school board and many others throughout San Diego and Imperial Counties, are very concerned that SDSU changed the rules of the game without consulting the appropriate people and without giving high school seniors adequate time to prepare.”

Alleging that SDSU unlawfully withheld documents, the ACLU of San Diego & Imperial Counties has sent a demand letter asking for the full disclosure of documents. “Access to information is a fundamental right,” stated David Blair-Loy, legal director for the ACLU. “It is especially important on an issue such as the elimination of the local guarantee, which has a significant impact on the community.”