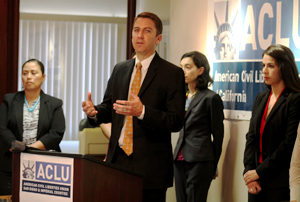 June 23, 2013 (San Diego)--Using misinformation, deception, and coercion, Border Patrol and ICE officers have pressured hundreds, if not thousands, of Mexican nationals with deep roots in the United States into forfeiting their right to a fair hearing and a chance to live here lawfully, alleges the ACLU in a lawsuit filed June 4 in federal court in Los Angeles.

Plaintiffs include the mother of an autistic son who is an American citizen, a grandmother of U.S. citizens, a man with an American wife and children, and a man engaged to marry a U.S. citizen who has since wed his fiance in Mexico. All are barred from returning to the U.S. for at least 10 years.

The lawsuit, Lopez-Venegas v. Napolitano, alleges that as a matter of regular practice, Border Patrol agents and ICE officers pressure undocumented immigrants to sign what amounts to their own summary expulsion documents.  The procedure is formally known as “voluntary departure,” but it regularly results in the involuntary waiver of core due process rights.  An individual who signs for voluntary departure immediately surrenders his or her rights to a hearing before an immigration judge and is usually expelled to Mexico within a matter of hours.

“It’s unconscionable that immigration agents perpetually fail to tell individuals with the most to lose that there are direct and certain consequences of taking voluntary departure,” said Sean Riordan, staff attorney for the ACLU of San Diego & Imperial Counties. “One of the most serious of those consequences is a ten year bar prohibiting return to the United States. No one should have to make such a critical decision without knowing all the repercussions.”

The class action lawsuit filed by the ACLU of California, the ACLU Immigrants’ Rights Project, and Cooley LLP cites the experiences of seven individual plaintiffs, none of whom has a criminal background and many of whom were approached by immigration officers while doing routine daily activities, such as waiting for a bus.

All of these individuals have close family members in the United States and could have obtained relief against removal from an immigration judge or under Department of Homeland Security programs, but immigration officers affirmatively misstated the consequences of voluntary departure and pressured them to sign their own expulsion documents.

The lawsuit is also filed on behalf of two organizational plaintiffs, the Coalition for Humane Immigrant Rights of Los Angeles and the Pomona Economic Opportunity Center, which have been forced to divert their scarce resources in response to these unlawful practices.

Border Patrol was sued nearly 30 years ago for similar misconduct in its treatment of asylum seekers and children, but continues to pressure aspiring citizens to sign away their rights, according to the ACLU.

“This lawsuit demonstrates that those who are supposed to protect our borders and the values that America embodies instead too often demonstrate an acute disregard for human and civil rights,” a press release issued by the San Diego ACLU states. “ In order to convince immigrants to sign their own expulsion papers, agents and officers have intimidated and physically abused them, threatened to retaliate against their families, held them incommunicado, and presented them with false information.  This is not how an American law enforcement agency should behave.”

Attorney Anthony Stiegler, partner at Cooley LLP,  law firm handling the case, observed, “The policy and practice of misrepresenting an individual’s legal rights to summarily deport them from this country is inconsistent with the fundamental notions of fairness and due process under our Constitution.  The United States derives its core strength because we embrace these values and abide by the rule of law.”  He added, “We expect that this lawsuit will lead to the cessation of these forced ‘voluntary departures,’ the reunification of aggrieved individuals with their families and the improvement of our critical border patrol policies and practices.”

Plaintiff Ana Maria Dueñas is the mother and grandmother of U.S. citizens.  She had lived in the United States for over thirty years before a Border Patrol agent arrested her in 2011 while she was waiting for a bus in El Cajon.  A Border Patrol agent presented her with a form in English even though the agent knew that Ms. Dueñas only spoke Spanish.  The agent misinformed Ms. Dueñas that she could not obtain relief from an immigration judge in the United States, but that she could easily and quickly obtain legal status through her adult U.S. citizen children once in Mexico.  In fact, Ms. Dueñas would have been eligible to obtain lawful status if she had seen an immigration judge.  The agent threatened Ms. Dueñas that if she refused to sign the form, she would be detained for a minimum of two months, without informing her that she could be released on her own recognizance or bond if she chose not to agree to “voluntary departure.”  Further, before presenting her with the form, the Border Patrol agent failed to inform Ms. Dueñas in Spanish that she could call the Mexican Consulate or an attorney.  The agent also failed to inform her that she would not be able to reenter the United States for ten years if she left the country.  Ms. Dueñas signed the form, even though it was in a language she could not read, and was expelled to Tijuana almost immediately.

Plaintiff Gerardo Hernandez-Contreras is a husband of and father to U.S. citizens.  In 2012, he was driving in San Diego and talking to his wife on his cell phone when he was stopped by a police officer who turned him over to Border Patrol.  Mr. Hernandez-Contreras’s wife rushed to the scene of the traffic stop and begged the Border Patrol agents not to take her husband, but they took him away and pressured him to sign for “voluntary departure.”  The agents threatened Mr. Hernandez-Contreras that if he refused to sign he could be detained for several months, without informing him that he could be released on his own recognizance or bond if he chose not to agree to “voluntary departure.”  The agents also failed to inform him that he would not be able to reenter the United States for ten years if he left the country.

Plaintiff Samuel Nava is the husband of a U.S. citizen wife.  Border Patrol agents arrested him after a traffic stop in 2011 and took him to a Border Patrol station.  Agents threatened Mr. Nava that if he refused to sign he could be detained for months, without informing him that he could be released on his own recognizance or bond if he chose not to agree to “voluntary departure.”  The agents further misinformed Mr. Nava that he could not obtain relief from an immigration judge in the United States, but that he could obtain legal status through his fiancée once in Mexico.  The officers also made threats against his family and failed to inform him that he could not reenter the United States for ten years if he left the country.  Under this pressure, he signed the “voluntary departure” form and was expelled from the country.  His fiancée was effectively forced to leave her life here in the United States and join Mr. Nava in Mexico, where they married and have been living.