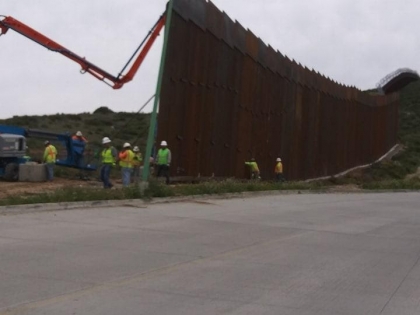 File photo: A section of the old border fence being torn down in San Diego’s East County as work continues on new wall despite lawsuit and pandemic

July 23, 2020 (Washington D.C.) -- The American Civil Liberties Union yesterday asked the U.S. Supreme Court to halt construction of President Trump’s border wall. In a motion filed on behalf of the Sierra Club and Southern Border Communities Coalition, the ACLU is urging the court to lift an earlier stay that allowed the Trump administration to divert $2.5 billion from military pay and pension funds for border wall construction that Congress had specifically denied.

The Trump administration has continued building the border wall despite lower court orders blocking the construction and ruling it illegal.

“The Trump administration has lost in every lower court, but is still rushing to complete the president’s border wall before the Supreme Court can review the merits of this case. If the administration succeeds, there will be no border wall construction left to stop by the time the Supreme Court hears this case,” said Dror Ladin, staff attorney with the ACLU’s National Security Project. “We’re asking the Supreme Court to join the lower courts and put a stop to the president’s destructive wall obsession before it’s too late.”

The latest move comes in a lawsuit, Sierra Club v. Trump, filed by the ACLU on behalf of the Sierra Club and Southern Border Communities Coalition. The groups are asking the Supreme Court to block the ongoing construction as the underlying case proceeds before the court.

A press release issued by the ACLU states, “As the Sierra Club and SBCC have long warned would happen, construction of President Trump’s border wall is desecrating ancestral and burial lands, destroying protected landscapes, and threatening wildlife.”

Gloria Smith, Sierra Club’s managing attorney, says, “The Supreme Court must step in and stop the Trump administration’s unconstitutional border wall construction. Misusing military funds has resulted in construction projects that are destroying irreparable and sacred tribal lands, decimating habitat and wildlife refuges, and forever scarring borderland communities. It is past time to halt this wasteful and irreversible damage.” 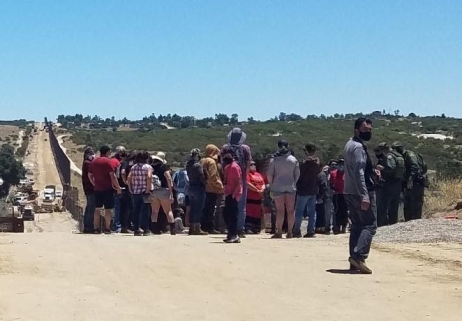 Locally, Kumeyaay tribal members including several tribal chairs have held protests temporarily halting blasting for construction over sacred sites in the Campo and Boulevard areas. They allege that Native American tribes were not properly consulted as required by law, that tribal monitors have not been present and that cultural resources have been identified by local tribal members at the site of planned blasting to build the wall.  The Border Patrol has claimed it provided a cultural resources monitor, but did not respond to media requests for names of the monitor.

The White House has contended that the new wall is needed as a matter of national security. However some in Congress have argued that now amid a pandemic, funds allocated on the wall would be better spent to fight the greater threat posed by the COVID-19 virus and to provide relief to individuals and businesses suffering from months of shut-downs and job layoffs. The U.S. has more cases than any nation in the world and most countries have banned Americans from traveling to their nations. More Americans have died of the new coronavirus than were killed during World War I.

The Supreme Court has not yet decided the ultimate outcome of the case, and every lower federal court that has considered the issue has held that Trump’s border wall illegally circumvents Congress’s deliberate decision not to fund the construction. No court has suggested that the Sierra Club and SBCC do not face real injuries from Trump’s actions.

The Trump administration maintains that no injured party — not the ACLU’s clients, not affected states, and not even Congress — can go to court to challenge the administration’s actions. The Ninth Circuit Court of Appeals forcefully rejected that argument last month, warning. “This is a rare case in which the judiciary may have to intervene in determining where the authority lies as between the democratic forces in

our scheme of government.”

The court concluded that Congress “declined to provide additional funding for projects in other areas, and it declined to provide the full $5.7 billion sought by the President: it is for the courts to enforce Congress’s priorities, and we do so here.”