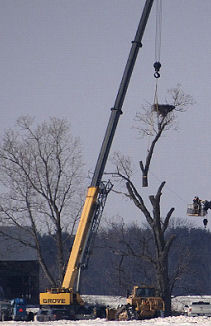 January 20, 2013 (San Diego’s East County) – Wildlife protection groups and residents have reacted in horror to the removal of an active bald eagle nest by a wind developer in Canada, an event documented on video January 5, just weeks after a photo of the active pair was taken at the site.

Now ECM has learned that the environmental documents filed by Iberdrola Renewables for its Tule Wind project in McCain Valley would allow SDG&E to “remove all existing raptor nests” prior to construction.

The removal of the bald eagle nest at Haldimand in the Canadian province of Ontario on January 5 was documented on video by the Ontario Wind Resistance group.  The removal was done by contractors working for Nextera Energy, leading opponents to dub the company “NextTerror.”  The Canadian government authorized the removal despite the fact that the bald eagle is a species of concern in Ontario, because it was within 20 meters of a proposed turbine blade sweep.

Haldimand Mayor Ken Hewitt has stated that he was “shocked” when told of the nest destruction. Haldimand had 57 active bald eagle nests. San Diego County has approximately the same number of golden eagle nests. 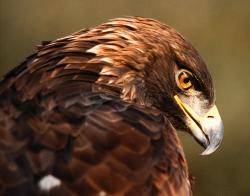 The same fate may soon befall nests for eagles and other birds of prey (such as hawks and eagles) in McCain Valley, site of Iberdrola Renewable’s Tule Wind project that the Bureau of Land Management and County of San Diego have approved in East County.

The U.S. Fish and Wildlife Service recently passed new regulations to allow the wind industry to obtain permits for nest removal:   http://www.fws.gov/forms/3-200-72.pdf    Permits may be obtained where removal of a bald or golden eagle nest is “necessary to alleviate a safety emergency to people or eagles.”

Jim Wiegand, wildlife biologist with Save the Eagles International, has blasted the action. “Of course, there probably has never been one eagle nest removal that was a `safety emergency’ to people,’” he observed.

Could it happen here? In a word, yes.

Wiegand warns that the Cane Brake nest in McCain Valley might be targeted for removal. He provided the following map: 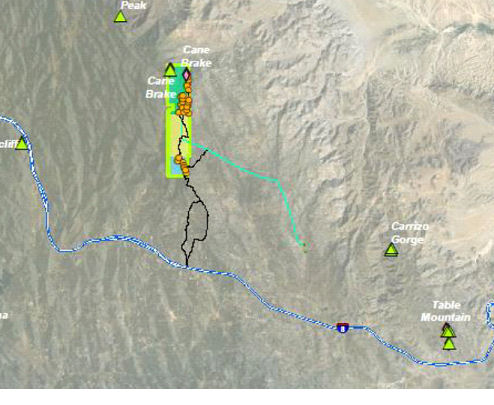 Several months ago, the USFW adopted a highly controversial policy to issue “take” permits to wind developers exempting them from prosecution for killing limited numbers of endangered eagles.  Killing an eagle by others is a felony punishable by prison and fines up to $100,000. Take permit applications for eagles have been submitted by wind developers already in Minnesota, Oregon and North Dakota.

In Germany, research done by the Leibniz Institute for Zoo and Wildlife Research found that German turbines killed bats from up to a thousand miles away, suggesting that “turbines were not only affecting local wildlife but could be dramatically affecting population numbers from across northeastern Europe,” Clive Hambler, a specialist in species extinction from Oxford University, wrote in an essay published in the UK Spectator.

He suggests that current renewable energy sources may be doing more harm than good.

“Wind farms are devastating populations of rare birds and bats across the world, driving some to the point of extinction,” the species extinction expert concludes. “Most environmentalists just don’t want to know. Because they’re so desperate to believe in renewable energy, they’re in a state of denial. But the evidence suggests that, this century at least, renewables pose a far greater threat to wildlife than climate change.”  http://www.spectator.co.uk/features/8807761/wind-farms-vs-wildlife/

Update:  On January 22, ECM received the following e-mail from Jerry Van Velden, VP of Operations, Save the Eagles: 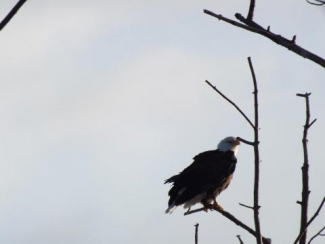 My name is Jerry Van Velden, and I live right next to where the Bald Eagle Nest was taken down by Next Era Energy in Haldimand county. Yes it is the great white north.

I am absolutely disgusted by our governments action on this situation and as a result we have started a Face Book page called Save Our Wildlife Protest. I have posted a link below if you want to send out to your readers. If I can assist you in any way, please do not hesitate to contact me. I also just took the attached picture less than 20 minutes ago of the male looking for his dinner over lake Erie.

They mate for life. The biggest nest ever weighed nearly 3,000 pounds!  http://www.learner.org/jnorth/tm/eagle/NestAbout1.html  It's no simple feat for eagles to just go elsehwere and build a new nest.

Just think if they deliberately cut off the branch where the Bald Eagles just made a nest in that eucalyptus tree at the preserve in Ramona?

They are trying to add more land to their preserve in Ramona.   Yay! . . . except that at the same time, other backcountry areas that provide the same excellent habitat for Bald and Golden Eagles and other birds of prey are being fragmented, such as McCain Valley.

They don't even know where those Bald Eagles who built that nest in Ramona came from or where they will go afterwards.   Wouldn't it be a shame to provide them safe habitat to raise their young on that preserve only to have them get "chopped up" by a wind turbine somewhere else in the backcountry?

We have observed many nests and perching lookouts in large boulders used by Golden Eagles and other large birds of prey in McCain Valley, which is known for its boulder-strewn landscape.   How many boulders are they planning to blow up so the birds won't use them?