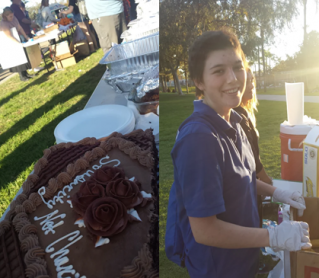 February 1, 2018 (El Cajon) --- Activists praise the end of a ban on feeding the homeless, but continue advocating for further changes in El Cajon.

At a food sharing event organized by Food not Bombs and Breaking Bread on Saturday, Jan. 27, transients and volunteers filled Wells Park. There was a swathe of donated clothes, blankets, and hand sanitizer, as international media attention brought additional support to the advocates who have worked for months to repeal the ban. Houseless people filled plates with beans, chow mein, bread, peach cobbler, and a chocolate cake which read “solidarity not charity.”

Many of the ‘El Cajon 12’ who were arrested during the Martin Luther King Jr weekend for breaking the ban on sharing food with homeless people in public places came back to celebrate the ban’s end. The city’s controversial ordinance included sunset language that terminated the temporary ban when the County ended its public health emergency declaration over an outbreak of Hepatitis A.

Despite the joyous atmosphere at the gathering, a taught anger hung in the air. In conversation, people still distrusted El Cajon’s efforts to, in their view, criminalize homelessness. The dozen arrested activists are still facing a $1,000 fine or six months in jail for something that is no longer illegal.

Fourteen-year-old Ever Parmely was the last activist to be arrested. Teens leveraged their age by insisting to be included in the arrests, knowing people would be outraged to have a minor cited for volunteering. “I did want to be arrested with everyone else because number one, I’m breaking the law too. And number two, usually if someone who is younger gets arrested that helps bring attention to what’s going on,” Parmely said.

In the early efforts to break the ban with food sharing events, Parmely was nervous. By the time police officers followed through on threats to cite and release offenders, the activists were able to quell anxiousness by laughing as ‘Bad Boyz’ played on their cell phones while a fleet of police cars rolled into the parking lot.

Originally brought in by his activist mother, Parmely said the issue is personal now. There are higher rates of homelessness in the LGBTQ+ community. According to the Williams Institute, 40 percent of youths on the streets identify as LGBTQ+, despite only making up 5 to 10 percent of the general population. Parmely even has a friend who ended up homeless after being kicked out of his house.

“I would want to be able to feed him,” Parmely said, “It’s more to just put you in their shoes. How would you feel if somebody was just like no, that person can’t feed you if you’re hungry?”

El Cajon was the only city to enact a ban on free food being given away at public events when the Hepatitis A outbreak was declared a county emergency.

The virus which affects the liver and can be fatal is most commonly spread through eating food contaminated with the virus by someone who did not properly wash their hands after using the toilet, according to the Mayo Clinic. Transient communities without access to proper hygiene are particularly at risk.

“They blamed the Hepatitis A outbreak on the homeless and feeding the homeless,” protester Nicole D’Angelo said of the city. “But in the medical field Hepatitis A is not spread by feeding people. It’s spread by not washing your hands after using the restroom or doing other activities.” She said the locked restrooms at Wells Park block everyone, including kids, from washing their hands— potentially spreading disease. The city has indicated a broken pipe has been responsible for keeping restrooms at Wells Park closed for nearly a year; the city later opened porta-potties.

D’angelo did not hand out food while the police were present as she could not afford to take the time off work to pay a fine or even go to court. She held a sign in protest instead while police recorded the other volunteers giving away food.

“The stupidest thing of all was that we were handing out food that was pre-packaged,” D’Angelo said. “For the city to spend the money to send all the officers, there was at least 15 officers here for a couple hours, handing out tickets. That’s such a waste of taxpayer money. That could have been money put towards repairing the restroom.”

The city of San Diego started bleaching sidewalks, providing free vaccines, and opening hand wash stations when Hepatitis A broke out. El Cajon took some of these same steps, but kept bathrooms closed at Wells Park and went further to ban food sharing in parks and other public locations. The city has argued that there are many other locations available for the homeless to obtain food in the city on private property through a variety of programs and nonprofits.

In recent months, the city has voted to expand funding for emergency shelter for the homeless, also adding an app to assist the homeless in finding services, a family reunification program and more.

The Mayor of El Cajon said the city, along with all of the other cities in the county, are scrambling to address the growing problem because no one expected the number of homeless to explode in the past two years.

“We do probably more for the homeless than any city in San Diego between our youth  transitional living center and our homeless navigator and our homeless reunification person. We’re doing as much as we possibly can and we’re going to probably continue to add services,” Mayor Bill Wells told East County Magazine.

But some activists were unaware of those efforts or felt they did not go far enough, viewing the public feeding ban as a punitive measure meant to rid the city of people on the street particularly given the city’s recent ban on panhandling.

“No other city in San Diego County had that ban (on feeding)  except El Cajon. We feel that it was a direct assault on the homeless. That’s why we wanted to protest. Everybody deserves food,” D’Angelo said.

She urged the city to drop the charges against the activists, something Mayor Bill Wells says he is working with the city attorney to do.

“I’m open to dropping the charges on all of them because punishment is really not the issue here. We never wanted to punish anyone. This was just about trying to protect from Hepatitis,” Wells said.

Parmely is still frustrated by the bathroom closures at Wells Park as they await a court date they were notified of in the mail.

“On the day we got arrested, I went to go use the bathrooms. I went to wash my hand and there’s no soap, there’s no paper towels, and the water barely runs. You're putting in more effort in arresting people trying to help the homeless than actually making it a clean place to stop the Hep A spread which is what the ban is allegedly trying to do,” Parmely said. “Put a little more effort in the handwashing station than arresting people, then you’d actually be credible.”

The ban was lifted last week when San Diego County said the health emergency which sickened 500 people was over. But for the activists, the work is not over.

D’Angelo brought a City Council to-do list which included dedicating more services to the homeless and end other measures targeting the houseless community. It’s still illegal for a homeless person to lay down and try to sleep in El Cajon public areas. She wants the city to provide social services treating a lot of the problems leading to living on the streets— mental illness, addiction, and alcoholism, as well as for the city to provide housing for people to get back on their feet.

Wells agrees the city has more to do. However, he says this will cost millions of dollars. He is pushing for the county to free up money so all can combat the growing problem.

“Sometimes I think there’s this perception that people in the government don’t care or it’s low on the priority list but I can tell you I talk to all the other mayors in the county, and every single one of us would say this is the biggest problem we have,” said Wells, “I don’t think anybody’s not working on it.”

Those involved in the arrest were particularly outraged by actions of El Cajon, but the international media attention also brought new volunteers who were more focused on spending the day spreading kindness to others.

Many people receiving food thanked the volunteers for bringing them a home-cooked meal, a rarity in their circumstances.

With the court date still looming, Parmely is worried the they will have to tell their dad they are in court if they are late to a birthday celebration he planned. Still, he and others say they don’t regret getting involved, and getting arrested. Parmely even encourages others to join in future forms of civil disobedience, saying, “Activism is easy. There’s no perfect protest, there’s no perfect activist. There’s going to be something that’s wrong or flawed so don’t worry about it. Just do your best and show up.”