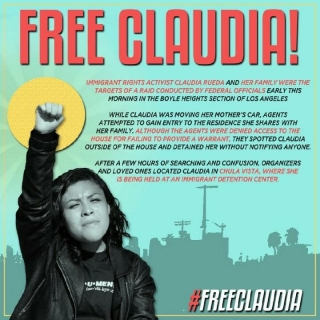 May 22, 2017 (San Diego) -- Last Thursday the Border Patrol detained college student Claudia Rueda from Boyle Heights, Los Angeles, as she moved her mother’s car for street cleaning. Agents tried to enter the family home, but they were denied access without a warrant. Rueda, a “dreamer” who came to America as a minor, was eventually taken to the Immigration and Customs Enforcement (ICE) detention center in Chula Vista.

On Friday, Border Patrol agents disclosed Rueda was amongst seven people linked to an investigation on “a cross-border narcotics smuggling operation.”  However, all detainees were arrested for immigration violations, unrelated to drug offenses, according to the Border Patrol statement.

Rueda was preparing to apply for deferred action for childhood arrivals (DACA), but she was unable to gather enough money for the filing fees, according to the Democratic Socialist of America (DSC).  Rueda is studying Latin American Studies at Cal State L.A. She’s an Immigrant Youth Coalition organizer, who is a prominent voice in local activism efforts.

“She is an extremely sweet individual. She’s actually shy or reserved, more introverted. There’s this idea that all people who organize are super extroverted, outgoing people who just love yelling. That’s not true at all.”

A couple weeks ago federal authorities arrested Teresa Vidal-Jaime, Claudia’s Mother, for being undocumented. That arrest was made during a massive drug bust at the Boyle Heights apartment complex. Vidal-Jaime’s husband was arrested for drug possession, where investigators impounded more than 30 pounds of cocaine, and $600,000 in cash, according to the U.S. Border Patrol.

Immigration services released Vidal-Jaime on bail just before Mother’s Day because of Rueda’s extensive protesting. Due to the nature of Rueda’s case, Rafilwe, a fellow IYC (Immigrant Youth Coalition) activist and student at UCSD chose not to disclose her last name, but she met Rueda last September through mutual activism work. Rueda has made an insurmountable impact on the immigrant community, and even herself, she said.

“Claudia played an instrumental part in her Mother’s case, in garnering support, organizing community letters with the support of IYC, and we don’t believe it’s coincidental that just days after her mother’s release, with her support in organizing, that Claudia’s been picked up.”

President Donald Trump has said that his deportation efforts would not target “dreamers” and would target only criminals.  But Rueda has never been convicted, or even charged, with any crime other than immigration violations that could be used against any undocumented person.

Rueda was arrested once before by the LAPD in January 2015 for suspicion of trespassing outside the downtown office of the U.S. Citizenship and Immigration Services.

Rafilwe explains that arrests of Rueda and her mother are indicative of a larger issue that’s surfacing in L.A. and the San Francisco Bay Area, which is the militarization of communities. Within the last few weeks, the San Clemente checkpoint between L.A. and San Diego has reportedly become more thorough by implementing a higher level of invasive profiling and interrogation procedures, she said.

“And also because our communities are being affected, we’re going to continue being loud and continue to be organized, so if people have a problem with their individual things being disrupted, they might as well be a part of the solution.”

On Monday at 10 a.m., IYC invites the public to join them at San Diego’s downtown federal building, located at 880 Front Street #2232, in demanding a sit down with the director of ICE. They will be requesting the release of Rueda, and a further explanation for her detainment.

“If we don’t acknowledge the person, acknowledge each other in the community spaces that we’re in, and fight just as hard for the individuals as the community, we’re not really being effective. And so I think she’s someone who taught through demonstrating, but also through listening.”

This supposed to be a nation of laws and the girl is an illegal alien. She deserves to be deported and al the crying and whining in the world should not stop this. We have laws to protect the CITIZENS , not give special trealment to illegal aliens.
No such thing as an undocumented student, one is legal or not.
Long past time for this stupidity and war against the Citizens of the USA to stop. Only traitors support illegals and illegal entry

One can argue rationally over holding adults responsible who come here illegally.  But why harm children brought here as babies or youngsters, who did not do anything wrong?  It wasn't their decision to come here,  but they were raised here, many only speak English and have known no other country.

I'd rather have a student or hard-working young person as my neighbor than a hard-hearted person who lacks any compassion for the less fortunate.