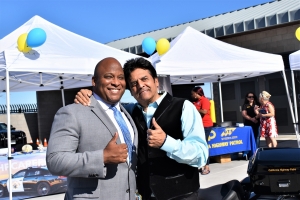 “I can get you out of a ticket,” quipped Estrada during his appearance. His humor matched with the celebratory spirit of the day and debut of the facility to the public.

The facility, according to public information officer Jake Sanchez, opened last fall but this was their first open house for the public.

But the event was not just about a photo opportunity with “Ponch.”

The event also highlighted the good deeds of five individuals during the ceremony.  One, Spring Valley resident Cassie Wells, a hospital corpsman second class with the Navy, helped to save Dennis McNear from a vehicle crash when he had a medical emergency. 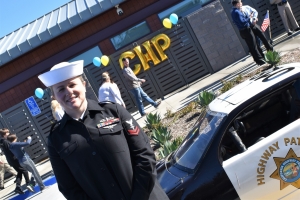 Wells, was four-months pregnant when she acted, in conjunction with  other good Samaritans, as a lifesaver.

“I was behind him (Dennis McNea) when I saw him hit the center divider (on the 94-E). I called 911,” she said. She and the others helped to guide him safely to a stop and address his medical needs until the paramedics showed up. The incident happened in Nov. 2019.

McNea voiced great appreciation in interviews to his heroes.

The open house is a milestone for the region.

“This is a momentous day for the CHP and San Diegans alike,” said CHP Chief Omar Watson of the command center.  The former location was on Pacific Highway and opened in 1973.

Sanchez relayed some of the facts about their current workforce and equipment. 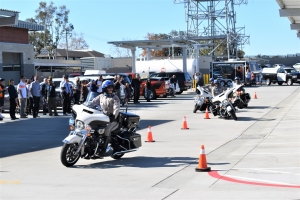 What motorcycles do the CHP use?

The open house offered tours of the public parts of the building and of their mobile command center trailer, opportunities for selfies in the CHP helicopter, and a lunch.

“We have in excess of 300 attendees,” said Sanchez.

Some of those attendees were from Mexico.

“This speaks well of our relationship between Mexico with the CHP Patrol” said Mexican police officer Ivan Castillo on his and two other officers’ attendance at the open house. “This shows that if you are doing anything criminal in the US or Mexico---we are going to collaborate.”

The command center has items that showcase parts of their history via pictures from days gone by and equipment. The CHP was created via legislation on August 14, 1929.