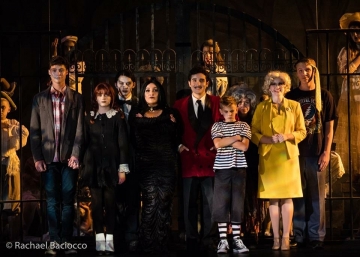 October 26, 2017 (La Mesa) - What sbetter way to spend time on the Halloween weekend than spending time with the family seeing a wholesome play, and getting your creepy fix? CYT (Christian Youth Theatre) has one more weekend at the Joan Kroc Center, presenting The Addams Family, directed by Joshua and Amanda Pontsler, who did an amazing job with this huge cast. The kind of entertainment that has you smiling from ear to ear. 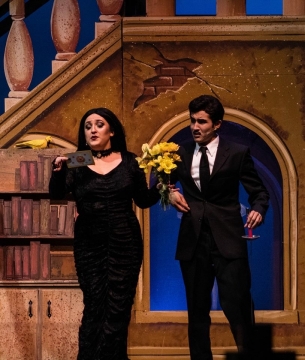 You might remember the movies from the 90s or the television show from the 60s. Did you know the Addams family originally came from a comic strip in the 30s? Creator Charles Addams was inspired by Victorian homes and graveyards in his hometown in New Jersey.

The musical came about in 2010. Although ooky and kooky, the Addams family is bonded by love. Something most of us can identify with. And let's admit it, who doesn't have the odd relative or two?

The Addams live in modern day Central Park, New York. Little Wednesday is all grown up and in love. She wants to marry but can her family pass as normal?

Wednesday is played by fourteen year old Rivers Harris. She handled the role with aplomb, and had an amazing voice. Sixteen year old Vivian Romero took on Morticia. Simply fabulous. Luis Sherlinee, played Gomez. The man with the jokes. Uncle Fester is kind of a narrator of sorts, played by Asher Parsons, and loved by all. Thirteen-year-old Dakota Sandoval takes on Grandma, Great job. The show also feature Joey Clark as Pugsley, David Atienza, as Lurch, Nick Aiello as Lucas and Hannah Clark and Nikita Belous, as his parents. The cast features many more wonderful ghouly creatures, giving the show the eeriness to make it fun. The ancestors and Sprites gave such flavor.

Props go out to Lynn Renfrow for the fabulous costumes. There were so many and each one was more amazing than the next. My favorite number in this one is the Tango. Everyone is always waiting for Morticia and Gomez to tango, and they do not disappoint.

Three more shows and seats are going fast - check the website now to get seats for your family.

If you miss this show you can catch The Little Mermaid this winter.