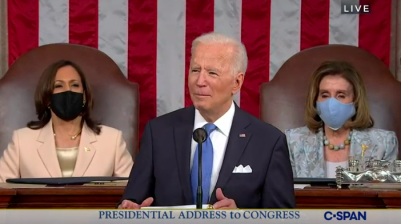 April 29, 2021 (Washington D.C.) – One hundred days into his presidency, Joe Biden addressed Congress and the nation last night in a speech that laid out the most ambitious goals since Franklin Delano Roosevelt after the Great Depression.

There are parallels, with Biden taking office amid a global pandemic that sparked widespread joblessness, and the scope of actions envisioned by Biden are on par with FDR’s New Deal.

“Tonight I come to talk about crisis and opportunity, about rebuilding a nation, revitalizing our democracy, and winning the future for America,” the President said. He noted that his administration took office amid “the worst pandemic in a century, the worst economic crisis since the Great Depression,” and “the worst attack on our democracy since the Civil War,” a reference to the capitol insurrection.

In his speech, Biden laid out plans to create jobs for the middle class, including jobs for blue collar workers, in clean energy manufacturing and infrastructure construction, including replacing all lead pipes in homes and schools nationwide as well as building roads, bridges, transit lines and more in the largest jobs plan since World War II.  The White House estimates the plan will create millions of jobs and infuse trillions of dollars into economic growth over the next eight years. “These are good-paying jobs that can’t be outsourced,” Biden noted.

He also touted free preschool and community college, and putting the U.S. back on a competitive footing with China and other nations. He also claimed that his American Rescue Plan recently enacted is “on track to cut child poverty in half this year.”

The President would pay for his programs by raising taxes on the wealth, but he has promised not to sign any legislation that would raise taxes on anyone making less than $400,000 a year.  He is also asking Congress to restore funding cuts to the Internal Revenue Service in order to collect $780 billion in unpaid taxes due from wealthy tax cheats, according to an estimate by the head of the IRS.

Despite Biden’s plans to raise taxes on the wealthy, Wall Street has reacted favorably with the S&P 500 index up 10% since his inauguration. That’s the best start economically for any president since FDR in the 1930s, according to the Wall Street Journal, despite Trump’s dour prediction that if Biden won the election, “you’re going to see a crash like you’ve never seen before” in the stock market.

Biden’s speech had limited attendance due to the pandemic as well as security concerns following the capitol insurrection in January.

Biden touted his administration’s success in getting 220 million COVID-19 vaccinations administered – more than double the 100 million that he promised during his campaign. His American Rescue Plan sent $1,400 checks to most Americans, provided food for the hungry, rental assistance to prevent evictions, and loans to help small businesses reopen and keep employees on the job, he noted.

“It’s time we remembered that `We the people’ are the government. You and I,” the President said. He cited the unprecedented investment to develop the COVID-19 vaccine as a positive example of government investment to help the public.

Biden also entered office amid racial unrest following protests over police use of force, including the killing of George Floyd.  He called on Congress to pass the George Floyd police reform bill by next month’s anniversary of Floyd’s death by a Minneapolis officer convicted of murder. That measure is expected to face an uphill battle, however, with heavy Republican opposition.

The President touched on foreign policy, speaking of his announcement to withdraw U.S. troops from Afghanistan by September 11, 20 years after the 9-11 attacks. He also pledged competition with China, holding Russia accountable and addressing concerns over nuclear programs in Iran and North Korea, though without details.

Biden pledged to help Americans turn “peril into possibility” knotting that Americans are accustomed to rising up after being knocked down  “We’re working again, dreaming again, discovering again and leading the world again,” said Biden, who said he has spoken with around 40 world leaders since taking office.  “America is on the move again,” he told the American people.

Senator Scott defended the nation’s record on race, stating, “America is not a racist country.” He noted that unemployment for African-Americans dipped to 5.9%, the lowest since 1972, under the Trump administration before the pandemic.  Despite admitting to being racially profiled by police himself, Scott praised police officers and insisted, “We are not adversaries.”

Scott also credited former President Trump for getting the first doses of COVID-19 out tot the public, albeit in very limited amounts before Biden invoked a war powers act to boost production.

Scott noted that the prior Congress did pass multiple bipartisan relief bills. He also criticized Biden for not opening schools sooner; Biden has released a five-step plan to get all schoolchildren back into classrooms by this fall, though many have already reopened.