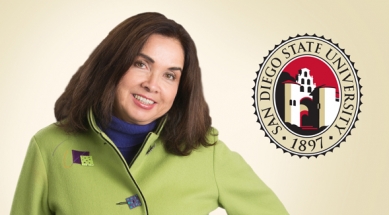 Adela de la Torre becomes the ninth permanent president of SDSU and the first woman to serve in that role.

“SDSU boasts a robust and dynamic variety of academic offerings taught by world-class faculty as well as a commitment to serve a brilliant and diverse population of students. It is an incredibly prestigious university and a wonderful point of pride for San Diego,” said de la Torre. “I am excited to join the vibrant university community that exists both in San Diego and the Imperial Valley, and I look forward to meeting and working with faculty, staff, students, alumni and supporters to further the SDSU mission.”

“Adela is a skilled, student-success focused administrator, and most importantly is a visionary leader. She emerged from a deep pool of candidates as the perfect person to lead the university,” said Adam Day, the chair of the SDSU search committee and the vice chair of the CSU Board of Trustees.

De la Torre will join SDSU from UC Davis where she has served in various leadership roles, culminating in her role as vice chancellor, student affairs and campus diversity. In that capacity, she oversees a division that encompasses 28 departments and units that provide programs, services and facilities to foster academic success, student development and campus community.

Previous positions at UC Davis include interim vice chancellor, student affairs (2012-13), director for the Center for Transnational Health (2004-present), and chair of the Chicana/o Studies department (2009-11). She also served as the director of the Chicana/o Studies program beginning in 2002 and special assistant to the dean, humanities, arts and cultural studies (2003-04).

De la Torre’s additional experience in higher education includes service as director of the Mexican American Studies and Research Center at the University of Arizona (1996-2002).

De la Torre is also familiar with the CSU, having served in the management fellows program at the CSU Office of the Chancellor (1995-96), as the chair of the Chicano/Latino studies department at Long Beach State University (LBSU) from 1991-95, and as a professor of health care administration (1988-96) also at LBSU.

De la Torre earned a B.S. in political economy of natural resources and an M.S. and Ph.D. in agricultural and resource economics all from the University of California, Berkeley.

“The Friends of SDSU commends the California State University Board of Trustees’ selection of Adela de la Torre as the new President of San Diego State University. President de la Torre will play a critical role in shaping’s the University’s future, including the potential expansion in Mission Valley made possible by the SDSU West initiative. SDSU West creates a path forward for the landlocked University to grow its enrollment capabilities, bolster its academic research power and continue to meet the higher education needs of our region.”