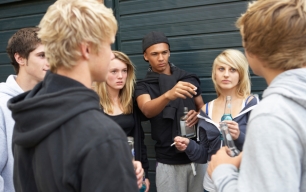 June 13, 2017 (San Diego's East County) - While summer is a welcome break from school for most students, it can also present unforeseen risks for teenagers.

That’s because minors are more likely to drink alcohol during their summer break when parents are at work and teens often go unsupervised.

County Health and Human Services Agency officials and the Sheriff’s Department are reminding adults that it is against the law to provide alcohol to minors, host underage drinking parties and to allow minors to drink.

“Alcohol is easily available to minors,” said Alfredo Aguirre, director for HHSA’s Behavioral Health Services. “They get it from older friends, strangers willing to buy it for them, store clerks who fail to check IDs, and adults, including their friend’s parents and sometimes even their own parents.”

Most kids don’t drink, but substantial numbers do. According to the latest California Healthy Kids Survey, 8.2 percent of seventh graders, 18.6 percent of ninth graders and 29.1 percent of eleventh graders had consumed alcohol in the past 30 days. Furthermore, 3.4 percent, 9.6 percent and 17.6 percent of those respective groups of students indicated they had binged on alcohol. Binge drinking is defined as drinking five or more drinks in a row to become intoxicated quickly.

“Underage drinking is dangerous and binge drinking even more so. Drinking large amounts of alcohol in a short period of time can result in alcohol poisoning which can lead to death,” Aguirre added. “So it’s important that parents talk to their kids and set clear expectations about not drinking. They do listen to you, even if it doesn’t seem like they do”.

Adults who allow a minor to drink could be:

Local law enforcement agencies have increased enforcement of social host laws and have issued hundreds of citations in the last few years.